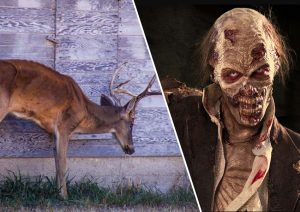 The “zombie deer” disease may have already begun to spread to humans. Earlier this year, experts from the CDC warned that this could happen.

Scientists began to panic due to the fact that the deer of North America are infected with a deadly infection, which is called a chronic debilitating disease.

Infection after entering an animal’s body begins to corrode the brain, which causes dementia, increased salivation and aggression. Some time ago, experts reported that perhaps the disease has already been transmitted to humans.

The diseased animal begins to lose weight and its behavior changes due to brain damage. It becomes aggressive and not afraid of people. The diseased animal looks very thin, with protruding ribs, red eyes and a meaningless look. It moves more slowly and looks like a real zombie.

To avoid infection, experts recommend refraining from eating venison. The authorities of Canada and the United States, where a small number of infected animals were also found, are urging hunters to check every deer they kill.

It is worth noting that earlier a study was conducted, during which it turned out that the disease “zombie deer” may well be transmitted also to monkeys and humans.