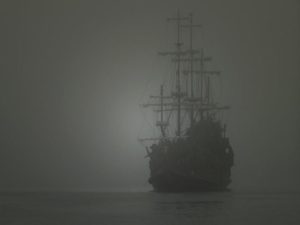 The Zebrina ran a fairly simple course between England and France, so when the ship was found aground south of Cherbourg in good condition but completely lacking a crew, naval authorities were at a loss. Most ghost ship stories involve the disappearance of the actual ship, but in the case of the Zebrina, it wasn’t the ship that was lost, it was all of her crew.

The Zebrina, a three mast schooner was built in Whitstable, and launched in 1873 with the intention of transporting meat to the UK from the River Plate region of South America, on the border of Argentina and Uruguay.

This probably explains her rather unusual hull design, being flat bottomed like a barge, which would enable her to sail up the tributary to reach the recently-formed town of Fray Bentos and world’s largest slaughterhouse.

Meat was originally salted to stop it decaying during a long sea trip, but refrigeration techniques had just been developed to produce ice, which was packed into the ship’s hold with the meat. A flat-bottomed ship could also hold a larger cargo than a conventional sailing ship.

But the owners plans of sailing to South America as importers of cheap, fresh meat, hit a problem. She was too slow. Boats had no refrigeration on board, so they had to get to a port and unload the meat before the ice melted.

It appears that the Zebrina failed to do so. To cut their losses, the owners decided to use her on the shorter Mediterranean trade trips instead.

From then she worked from port to port around Europe, most likely with different owners. On September 15, 1917, she left Falmouth in Cornwall, commanded by a Captain Martin, with a cargo of coal bound for Saint-Brieuc, France.

Two days later she was spotted drifting near Cherbourg, and then found washed ashore on Rozel Point, south of Cherbourg. Had she not been flat-bottomed she would have broken up before this point.

When the French coastguards boarded her, they found no crew, the table set for breakfast, some disarrangement of the sails, and the last entry in the captain’s log as the date she had left Falmouth.

The most obvious explanation was a U-boat attack. Common German practice was to allow merchant crews to board lifeboats or the U-boat itself before sinking the target. It is believed that the Zebrina had, on more than one occasion, been the target of a torpedo attack from a U-boat, but that the torpedoes passed underneath her flat bottom.

And interestingly she had a 23 man crew on that trip instead of the usual 6, so it would seem probable that she was being used as a Q boat – a merchant vessel modified to carry 8 or 12-pounder guns, used to lure enemy ships or submarines close enough to attack them.

The commonly held theory is that one such submarine, unable to torpedo her, surfaced next to her, then boarded and removed the crew. As these men were never repatriated at the end of the war, nor were their bodies found, it is believed that the submarine never made it back to port, either after some accident or by being sunk.

This however ignores several facts, chief among them that the captain’s log was still aboard and U-boat captains always claimed such documents as proof of their claim.

At the height of the war, Allied commanders had little time to investigate the mystery, and the barge was subsequently broken up. Post-war research never definitively put a U-boat along the Zebrina’s course.

In Search For Atlantis Of The Sands: Lost City of Iram