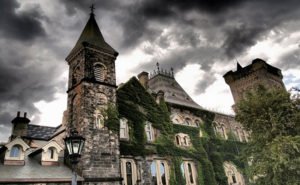 Ghost stories have existed as long as time itself and the older buildings that colleges and universities typically inhabit make them the setting for many a creepy tale.

Some have a resident ghost acting as a college mascot whereas others have a whole range of dead residents. With thousands of students and teachers to scare, colleges are the ideal place to spend your afterlife and we’ve compiled a list of the most haunted colleges in America.

Smith college has been an important institution for women’s education for nearly 150 years with impressive alumni including Sylvia Plath and Gloria Steinem.

One building on campus known as The Sessions House was built 1751 and is said to be home to young, heartbroken ghost called Lucy Hunt who would meet with her forbidden lover, a British general, in a hidden staircase in the building.

The hidden staircase is real and students over the years have reported seeing a woman haunting the area.

Founded in 1859, this university has a cemetery beneath and has also functioned as a war hospital and a World War II Military Camp.

Thanks to its creepy and bloody past, many ghost stories surround this university including mythical beings, phantom Japanese soldiers, a ghostly woman who was hanged and the souls of suicidal lovers.

The University of Notre Dame’s most famous ghost story is about a student-athlete football star who died in 1920. In his senior year, George “The Gipper” Gipp, contracted pneumonia not long after a huge football victory, and died.

He has since been seen by students riding a white horse throughout the university halls. The tragic story of a student cut down in his prime has lived on and become a Notre Dame folk legend.

100 years after its founding, thousands of the University staff and students were gunned down in the brutal massacre in Tiananmen Square 1989.

The victims were part of the famous government protest and are said to still walk through the University corridors and halls today.

Founded in 1386, Heidelberg is an ancient Universities with a long and often dark past. The ghostly occurrences here of haunting screams and cries of women are said to be the women forced to undergo sterilization in the university clinic during Nazi Germany.

Murdered professors and students are also said to be roaming the grounds.

More than 200 years old, this University has the years behind it to drum up a range of ghostly stories. Adding fuel to the fire, room 428, was mysteriously sealed off from entry many years ago.

Officially, it has been deemed uninhabitable, but rumours of supernatural activity following the death of a student in the room raise suspicions.

This was the first University in Scotland, founded in 1413. Famous spirits here include a handkerchief waving lady, a veiled nun and a ghostly golfer, said to be Tom Morris, an Open Championship winner.

Reports have also been made of the return of Patrick Hamilton, a key player in Scotland’s reformation who was burned at the stake.

Although a relatively new university, founded in 1949, its medical school has been around since 1857. Across campus, people have reported the horrifying smell of burning flesh and piercing screams.

The spirits here are said to originate from the 1945 atomic bomb dropped by America that killed 800 students and staff.

The university owns an apartment building known as Kilachand Hall built in 1923. The Pulitzer Prize-winning American playwright, Eugene O’ Neil lived on the fourth floor and died there in 1953.

The strange activity has been reported by students since including an elevator that will randomly open to the fourth floor. Possibly one of the most useful ghostly presences, O’Neill can take time out from making lights flicker and dim to help English students with their writing.

Dark histories and tragic events live on through spooky stories and scary spirits. The ageing building so often claimed by colleges and universities across the world are a hub for tales of the paranormal. Despite the huge numbers of ghostly reports, there seems to be no risk to living people’s health. Hopefully the university ghosts find their peace and move on in time.

Author Molly Crockett shares her lifestyle and nutrition passions in her writing at Ukwritings and Academized. She loves to find and share new recipes while taking her audience on her diet journey. In her spare time, Molly teaches writing skills for Essay writer.