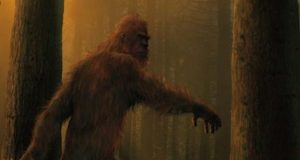 The woodwose, also known as the wodewose or the “wild man of the woods”, is a popular mythical creature that appears in the literature, artwork and architecture of medieval Europe.

The abundance of folklore and alleged first-hand reports of encounters with this Sasquatch-like creature have prompted many primatologists and cryptozoologists to wonder whether or not the woodwose may have actually existed, or still exists today.

In fact, the legend of the wild man so permeated the Middle Ages that Carl Linnaeus, the famous Swedish taxonomist who laid the foundation for our modern biological naming system, created a classification known as Homo ferus, which assumed the existence of the woodwose. According to Linnaeus’s writings, the Homo ferus was a bestial creature that had human-like features, but was covered in hair and moved on all fours.

Linnaeus also claimed that the Homo ferus lived separate from Homo sapiens, and made their dwellings in the forests and mountains. In modern times, however, Linnaeus’s Homo ferus classification has fallen out of favor with mainstream science, and is no longer officially recognized by the scientific community.

The “wild man” is typically described as being comparable to classical mythological creatures such as the satyr or the faun. Other similar creatures can be found in ancient Roman mythology, such as Silvanus, the deity of the woodlands.

The woodwose first began to appear on the landscape of European folklore in the 12th century, but it has endured as an enigmatic legend since that time. The wild man became extremely popular during the 16th century, and was commonly depicted in engravings, paintings, tapestries, and other works by some of the most prominent artists of the Renaissance period, including Martin Schongauer and Albrecht Durer.

Legends of figures similar to the wild man have appeared in the folklore and myths of various cultures throughout history. The earliest recorded example of such a figure is found in the Epic of Gilgamesh, the ancient Mesopotamian epic poem in which a wild man named Enkidu is created by the gods to prevent King Uruk from oppressing his subjects.

Some researchers have speculated that Grendel, the famous monster from the Anglo-Saxon epic Beowulf, may not have been an imaginary creature after all, but rather a woodwose-like entity due to being described as a bipedal man-beast that inhabited the forests of Sweden.

Perhaps one of the most well-known and influential renderings of the wild man archetype comes from the Book of Daniel, where King Nebuchadnezzar II is exiled from society and begins to take on the characteristics of a wild beast, including growing long hair and claw-like nails.

According to Daniel 4:33, God humbled King Nebuchadnezzar II in order to punish his arrogance, to the point where the king “ate grass as the oxen…and his hairs were grown like eagles’ feathers, and his nails like birds’ claws.” Some researchers have surmised that the account of King Nebuchadnezzar describes a supernatural phenomenon known as lycanthropy, an affliction in which human beings have the ability to shapeshift into wild animals such as wolves.

Other allusions to the wild man have come about as a result of accounts of feral children (a.k.a. “wolf children”), which are children that have been believed to be lost or abandoned by their parents in the wild, and subsequently raised by wolves or other wild animals.

One such account of this phenomenon was reported in 1934, when a group of Serbian hunters shot and wounded what they thought was a wild animal, only to discover upon closer inspection that the entity was actually a naked and very hairy teenage male.

This young woodwose-like being could rapidly and smoothly run on all fours, and could imitate the sounds of several of the animals that inhabited the woods where he evidently made his home. The hunters reported that the young wild man did not know how to speak any known language, and he ate a diet of roots and berries.

Another popular example of this phenomenon is the “Wild Girl of Champagne.” According to an account cited by Charles Linnaeus himself, this 19-year-old feral girl had been living in the forests of Champagne, France for nearly a decade before being caught and subsequently rehabilitated in September of 1731.

Typical descriptions of the woodwose emphasize the notion that the entity is some type of humanoid or “man-beast”, possessing somewhat of a savage nature and exceptional strength, with the ability to tear a human being limb from limb.

Stories of human encounters with the woodwose range from peaceful to brutal, but the majority of reported encounters describe the creature as elusive and unwilling to engage in any type of contact with humans.

One such account along these lines is that of Manuel Cazcarra, a Spanish woodsman who allegedly encountered a woodwose in the dense forests of the Spanish Pyrenees. Cazcarra claimed that on May 4th, 1993, he and a crew of four men were working in the woods when they began to hear a loud rustle in some nearby trees, along with some strange squeals and shrieks.

They went closer to the source of the commotion to investigate, and witnessed a 5-foot-tall humanoid creature clamoring up a tree. The creature jumped down out of the tree, hid behind a large thicket, and then hurled a large tree branch at them, at which point they chose not to investigate any further!

Each of the woodsmen had years of experience working in the forests, and were convinced that the creature they saw was not a bear or any other known forest animal. Later that week, the local Guardia Civil, accompanied by one of the eyewitness woodsmen, discovered several strange sets of footprints that could not be attributed to any known animal species in that region.

Some skeptical researchers have claimed that the woodwose, if it was ever real at all, may have simply been the last vestige of the Neanderthal or Cro-Magnon man, which would eventually come to full extinction.

Various iterations of the woodwose have circulated throughout numerous cultures all over the world, with the most famous examples being the ubiquitous legends of Bigfoot, Sasquatch and the Yeti. Many cryptozoologists have adopted the viewpoint that until the “wild man of the woods” can be disproven, it is perfectly reasonable to accept its existence as plausible.