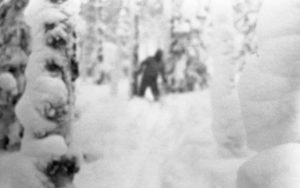 While best known for roaming the Pacific Northwest, the creature known as Bigfoot seems to be expanding its range. So much so in fact, that some Bigfoot investigators now classify the Eastern Bigfoot as a separate creature.

One report of the Eastern Bigfoot came on March 28th, 2000. James Hughes was making his daily newspaper deliveries, driving along County Road H about 1 1/2 miles from Cranton, Wisconsin, the same route he followed every day. It was about 5:15 am when Hughes said he saw something standing on the side of the road, partially hidden in a ditch. As he got closer he couldn’t believe his own eyes.

He described it as like a mini King-kong and it appeared to be carrying a small goat under its arm. It was 8 feet tall covered with long, shaggy dark hair. Hughes said the Bigfoots head was also completely covered with the long shaggy hair, so that he was unable to make out any facial features, except two dark eyes. Hughes sped off, and never saw where the Bigfoot went.

The next day Hughes reported the sighting to the local sheriffs office, deputies were sent out and accompanied Hughes to the location that he had seen the Bigfoot. Even though the wooded area that surrounds the location is several hundred yards from the road, no footprints were found, despite the fact that the ground was soft.

In fact, no evidence was found. No missing goats or other animals were ever reported. Hughes however, remains convinced that what he saw was real, and stands by his story.