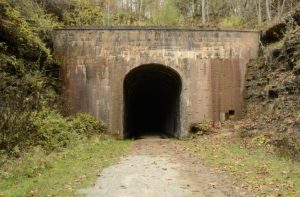 In 1910 an engineer on the B&O line outside of Cairo, WV was horrified to see a woman in white with long black hair standing on the tracks at the entrance to the Silver Run Tunnel.

He tried to stop the train but not before hitting her. Searching the tracks, the shaken railroad worker was mystified by the absence of a body.

After this incident was repeated on subsequent runs, word of the haunted tunnel reached B&O officials and the man was transferred to another line.

When his replacement started making the same claims he was told to keep quiet or lose his job. The angered engineer vowed that the next time he saw her, instead of coming to a stop, he would continue on at full speed and run the apparition down – and that’s exactly what he did when she appeared on the tracks a few nights later.

As he was pulling into his final stop that night there was an excited crowd waiting and the engineer began to panic, fearing he had actually struck and killed a living person.

He quickly jumped from the train and was relieved to find no signs of carnage. Then, as his fears subsided, he began to register what the excited group were saying and a deep chill overcame him.

The reason the crowd had gathered was that several telegraphs from towns in between Cairo and Parkersburg reported that as the locomotive passed a woman in white had been observed, tangled in the train’s cowcatcher. The man immediately requested a transfer, which was granted with no questions asked.

Rumors of the ghostly young woman began to spread and other engineers along the track began to see her. Trains slowed near the Silver Run Tunnel #19 to avoid her, many nearly wrecking to keep from hitting her.

A stalwart Irishman by the name of O’Flannery scoffed at the ghost stories. But it would not be long before she came to him along the tracks on a cool autumn night, disappearing into the fog.

After he stopped the train and searched around, O’Flannery vowed that if he saw her while driving the train again, there was no way he would slow his run down. He would simply not stop. Instead, O’Flannery would barrel right through her.

And one night, Engineer O’Flannery did. Along his run, the ghostly phantom of Silver Run Tunnel #19 showed herself at the entrance to the tunnel. Just as he promised, O’Flannery drove the train right through the woman. He watched in awe as she screamed and flew into the air.

Upon investigation, it was revealed that 25 years earlier a woman fitting the ghost’s description had gone missing along this line on her way to marry her fiance.

Then in the 1940s the skeleton of a woman with long dark hair and a white dress was discovered hidden in the wall of an abandoned house near the tunnel. It was buried in the cemetery nearby and for brief time sightings of the lady in white stopped.

Her identity and murderer remain a mystery to this day and those who live nearby still claim to see her on occasion wandering through the Silver Run Tunnel.

You can try to see and hear her too. Tunnel is about an hour and forty minutes from the Hocking Hills or 35 minutes from Parkersburg. The old train track is part of West Virginia’s Northbend Rails for Trails. Take flashlights, the tunnel is really long and very dark.