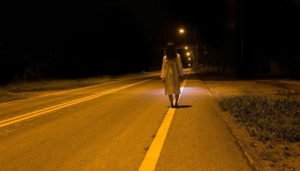 Balete Drive is a street located in New Manila, Quezon City is known for apparitions of a white lady and haunted houses that were built during the Spanish Era (the 1800s).

New Manila has an abundance of balete trees, which, according to legend, is a time honored favorite resting spot of wandering spirits and other otherworldly paranormal beings. Many believe Aswangs and their evil spooky paranormal pets live in these haunted trees, roosting and waiting for their next victim to draw near.

Paranormal experts believe that the white lady ghost was a poor woman who was brutally raped by Japanese soldiers during the Second World War, her corpse many say was not buried properly it was thrown on the side of the road and stayed there for many years, only to be carried away by birds, rats and other creatures over time piece by piece.

Some of her hair and bones are still perched high in branches as part of their nests or buried in rat holes in the ground under the trees and the street. And this tale which is supposedly told by locals as 100% truth differs from the movie version.

Her skull many say or her face which was cut away by a machete or bayonet blade was taken as his personal souvenir. Many believe she searches for the man or his descendants to exact her evil revenge upon them. Or as many believe today upon those that mock her existence.

Witnesses of the white lady ghost, advise other motorists to avoid the street at night at all costs, especially if they are alone. If it is necessary to travel the route, they advise that the backseat of the car is fully occupied and that no one should look back or look in any mirrors.

If your riding in a taxi cab you will notice the drivers’ edginess and fear and panic level rise. For if you or the driver see her then she will certainly mark you next for a certain violent death. Only by saying the holy rosary and fasting for the following three days after you see her might then you be spared.

Those who have seen the White Lady ghost and lived to tell of it say of her apparition that she wears a long white blood-stained nightgown tattered and ripped, and she has long disheveled tangled hair but has no distinguishable facial features or one covered with dripping blood.

If you are on foot or a motor bike or bicycle and she touches you then you will die on the spot. And if she chases you then it is a sign that you need to change your lifestyle or personal ways immediately and live a pious life. Many young men and women who have encountered her often will not speak of their encounters to do so brings sudden doom or bad luck.

Some modern tales say she was raped and killed by a taxi driver and this is why the fear driving in the area. Motorists are advised by locals to take alternate routes at night. If passing the road is unavoidable, there are several precautions one might take if they find themselves on Balete Drive: Make sure the backseat is fully occupied with people and no pets, don’t look back and don’t look in the mirrors.

Many believe that aswangs (witches) also live and seek out victims in the area. These evil witches are believed to prey upon lost pets and the homeless or a stray tourist that might trek through the area at night. Their evil pets Mannagals or Sigbin type creatures are also noted to be hungry for blood and souls to steal.

The Aswang witch and manananggal (sometimes confused with the Wak Wak in some areas by the Filipinos) is a blood-sucking creature. It resembles a Western vampire, in being an evil, man-eating monster or witch.

The myth of the manananggal is popular in the Visayan region of the Philippines, especially in the western provinces of Capiz, Iloilo, and Antique. There are varying accounts of the features of a manananggal. Like vampires, Visayan folklore creatures, and aswangs, manananggals are also said to abhor garlic and salt.

They were also known to avoid daggers, light, vinegar, spices and the tail of a stingray, which can be fashioned as a whip. Folklore of similar creatures can be found in the neighboring nations of Indonesia and Malaysia.

The intersection of Balete Drive is between Aurora Boulevard, a few blocks away from Gilmore Avenue and Broadway Centrum. The east side exits near St. Luke’s Medical Center and the west side exits near GMA-7 and Tomas Morato Avenue, one of the night-life centers of the city. The central intersection of Aurora Boulevard is the EDSA-Cubao shopping center built in the 1970s.