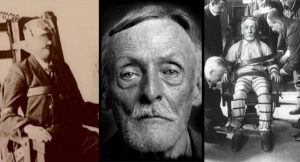 If you’re looking for a werewolf story this isn’t it, but you won’t be disappointed. Albert Fish was a very real man, a child rapist, a cannibal, and a serial killer so horrifying and so prolific that people across America attributed many monstrous titles to the mysterious killer.

The Gray Man, the Moon Maniac, the Brooklyn Vampire, and even The Boogey Man were just some of his popular titles. Introducing Hamilton Howard “Albert” Fish, the Werewolf of Wysteria…

The making of this monster begins with his birth in 1870 in Washington, D.C. His father, Randall Fish was 75 years old at the time of his birth and his mother only 32.

His family had a history of mental illness long enough to fill a medical text book. Randall Fish passed away when Albert was only 5 years old and his mother abandoned him to an orphanage where he was whipped and beaten daily. This would last until he was nine years old and his mother reclaimed him, but the damage was already done – Fish had begun to enjoy the beatings.

His teen years were filled with bizarre and disturbing behaviours, including commonly eating feces and drinking urine. He took to writing obscene letters to women whose names he acquired from classified advertising, however in 1890 at the age of 20, Albert Fish began raping young boys in Manhattan where he had moved with his mother. 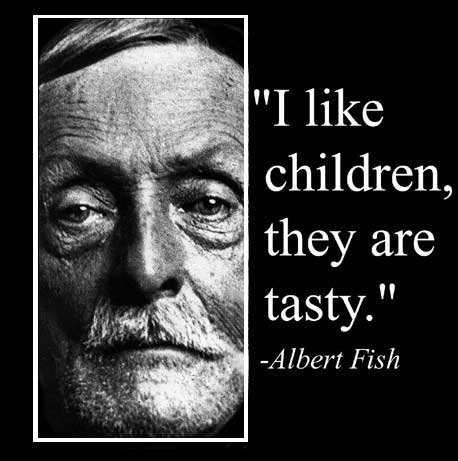 In 1898 Fish visited a waxworks museum, there he saw and was fascinated by a bisection of a penis, which caused him to become obsessed with sexual mutilation, and he acted on it when he tied up a nineteen year old boy, scissors in hand. What’s more disturbing is that throughout these eight years and the coming five years until his first arrest in 1903, Albert Fish was married with six children.

His first arrest was not as some might be expecting, but was for theft. Upon his release from prison his wife left him and incredibly, Albert Fish became a single father to four boys and two girls. By this time he had begun pleasuring himself through mutilation and was experiencing intense hallucinations of the apostles commanding him.

For the next twenty seven years Fish tortured, mutilated and murdered young children with what he termed his “Implements of Hell”. These implements included a meat cleaver, a butcher knife, and a small handsaw. In his own words he “had children in every state,” and that he liked children because they tasted the sweetest: “I never ate any roast turkey that tasted half as good”.

Following a number of minor arrests over the years, Albert Fish was on trial for the murder of Grace Budd in 1935. Grace was a teen girl, the sister of a boy who had posted a classified ad looking for work and had the unfortunate luck of catching Fish’s attention.

Her body was never found, but in an anonymous letter to Grace’s mother Albert Fish stated: “Grace sat in my lap and kissed me. I made up my mind to eat her,” and confessed “I choked her to death, then cut her in small pieces so I could take my meat to my rooms. Cook and eat it.”

The Werewolf of Wysteria Legend

Under the study of numerous psychiatric experts it was stated that Albert Fish was a “psychiatric phenomenon”, and that nowhere was there another individual who possessed so many sexual abnormalities.

Although he only formally confessed to the murder of three people, Fish claimed to have killed more than a hundred children in the 65 years he was free to hunt.

The legend of Albert Fish has propagated numerous biographical films including “The Gray Man” in 2007 and documentaries such as “Albert Fish: In Sin He Found Salvation” also in 2007. Not surprisingly he was the inspiration for many fictional characters including Hannibal Lecter.