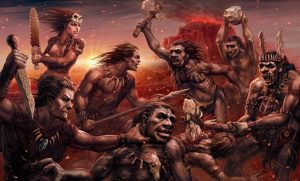 Neanderthals and humans were engaged in brutal guerrilla-style warfare across the globe for over 100,000 years, evidence shows.

It is known that Neanderthals and modern humans descended from the same evolutionary branch. Our genome is 99.7% similar.

About 600 thousand years ago, our ancestors split into two parts. Those who later became known as Homo neanderthalensis set out to explore Eurasia. Homo sapiens remained in Africa for several hundred millennia.

However, then the sapiens, following their cousins, also went to another continent. Now archaeologists and anthropologists are investigating how these two species coexisted in the same territories, reports sciencealert.com.

Both Neanderthals and sapiens were skilled hunters, good fighters, and good organization skills. However, due to the structural features of the body, the ancestors of modern people were more prolific.

This was one of the reasons why they made an exodus from Africa – in search of resources for food.

However, by this time Neanderthals had occupied the richest territories of Eurasia, and this led to a long period of rivalry between the two species.

At the same time, due to the similarity between the genomes of humans and Neanderthals, scientists concluded that our relatives had the same instincts to protect and protect their territories as we do.

Nicolas Longrich, senior lecturer in evolutionary biology and paleontology at the University of Bath, believes that the struggle for dominance in Eurasia has gone on for more than 100,000 years.

“The best evidence that the Neanderthals not only fought but also succeeded in war is that they were not immediately defeated. Instead, for about 100,000 years, Neanderthals resisted the expansion of modern humans,” says the scientist.

He also notes that, based on everything that researchers know about the habits of modern people, one could hardly expect that, having met rivals in vast territories rich in prey, people would allow them to stay nearby.

One of the reasons why the sapiens sought to exterminate the Neanderthals could be a demographic factor.

“Population growth inevitably forces people to seize more land in order to provide enough territory for hunting and foraging for their offspring,” the paleontologist added.

However, the fact that the struggle lasted so long proves that the Neanderthals were no less dexterous, skillful and courageous warriors than our species. In armament, tactics, strategy, people and Neanderthals were approximately equal.

However, at some point there came a turning point in this war. What caused this is not known for certain. One of the likely factors, scientists believe the invention of long-range weapons.

Another reason could be the ingenuity of sapiens, which allowed them to get more prey with less effort. And, therefore, it is better to feed your men, who have more strength for long fights.

In addition, more plentiful and satisfying food increased the survival rate of children, and, therefore, gave numerical superiority to sapiens.

The scientist also emphasizes that if the Neanderthals were pacifists, as some researchers tend to believe, the war would have ended much faster.

Probably, sapiens at some point were able to become more skilled warriors than their relatives. This was the reason that modern people conquered the planet.