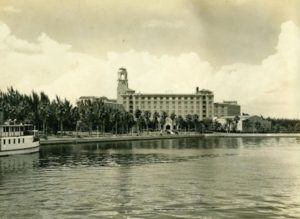 There are a few wonderful hotels on the Gulf Coast that deserve attention, not only for the opulence they afford to their guests, whether across the nation or the world, Florida can boast of some of the very best places of hospitality that should not go unnoticed.

The Vinoy Hotel, located in beautiful downtown St. Petersburg, was built by Aymer Vinoy Laughner, real estate magnet, and noted entrepreneur of his day. Completed in 1926, and originally known as the Vinoy Park Hotel, it operated as a seasonal resort, which usually ran from December to March for northern visitors. The rates were a whopping $20.00 a night, an exceedingly high price for those days.

But because it was regarded as one of the finest hotels, and frequented by many famous people, it was considered worth the price by the in-crowd of the roaring 1920′s. The Vinoy would entertain the rich and famous over the many years, with such personalities as Presidents Calvin Coolidge and Herbert Hoover, as well as baseball hero Babe Ruth and film star Jimmy Stewart to name a few. It survived the Great Depression respectfully, and during World War II the hotel was temporarily utilized by the U.S. Army as a barracks and training school.

After the war, the hotel was sold to Charles Alberding, who then renovated the hotel back to its former glory. The Vinoy would continue to prosper and service both domestic and foreign travelers happily until the early 1970′s, when it finally closed its doors to financial difficulties. Most of its contents were sold off, and the once beautiful resort hotel now stood silent and still. It seemed that the glorious era of fame and fortune was over.

Sadly, the hotel became a haven for vagrants and criminals on the run, having the police interacting almost on a daily basis within the still and very creepy hulk of the building. Indeed, this once opulent hotel was reduced to an eyesore and hideout for St. Pete’s illicit elements.

It wasn’t until the early 1990′s that this once glorious hotel would see life again — When a celebrated re-birth of sorts would occur. The long-dormant hotel, the massive and hovering building that seemed foreboding and dark, would now have some much needed light and life restored to it. 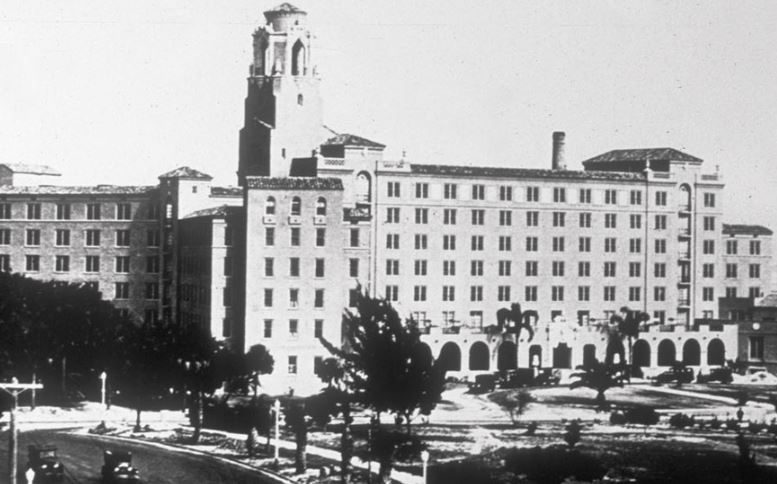 Though this would cost several million in renovations, and took two years to complete, its new owners, the Renaissance Hotels and Resorts and the Vinoy Development Corporation would put the Vinoy Hotel back in service, regaining all its former magnificence in the process. The new and up-dated Vinoy reopened as an almost perfect replica of its former self, successfully acquiring a faultless example of Florida’s golden age of resort hotels.

Today, the Vinoy Hotel once again proudly boasts its Mediterranean revival- style, complete with high wall construction and imported tiles, with a private marina equipped with personal launches, an 18-hole golf course and a 12-court tennis complex. If that’s not enough, there are a multitude of first-class amenities in this meticulously restored hotel that will please even the most pampered guest.

You’ll find the charming Marchand’s Bar & Grill; an open-air restaurant and café, along with the Terrace Room, the Promenade Lounge and Fred’s Private Dining Room. There’s little doubt that this enchanting resort hotel will always remain a fond memory for its guests and visitors, as this hotel’s singular appeal and thoughtful staff will always make the best impressions.

Every guest is likely to leave this luxurious resort hotel with a smile on their face, but some may leave knowing that something else is residing within the lovely corridors and stately suites here — some will leave knowing that this most exquisite hotel is thoroughly haunted.

The Vinoy Hotel, for the most part, is inclined to keep its legends of ghostly presences and hauntings somewhat hush-hush. They are more about making sure that the class and nature of this hotel remains exclusive, and positively remembered by its guests, rather than that of the supernatural. In spite of this, the Vinoy has entertained many people, both the common vacationer and the rich and famous who have walked away knowing, without a shadow of a doubt, that this beloved resort hotel has its share of ghosts and similar shadowy entities.

Indeed, there appears to be a few individual spirits here, as local legend dictates, but only one stands out above the rest — The spectral image of a lady dressed in white. This unidentified specter, which is said to glide throughout the fifth floor hallways in a flowing, almost transparent gown and shroud, has made herself visible to only a few guests.

Although this sad entity wanders alone and in evident dismay, she apparently finds a soft spot for selected guests staying on this floor. This may include a lone male traveler, or highly public people; but above all, she takes a shine to baseball players. Of the most popular legends regarding the lady in white revolves around a few shaken baseball players who have had personal confrontations with this hotel’s resident spirit. 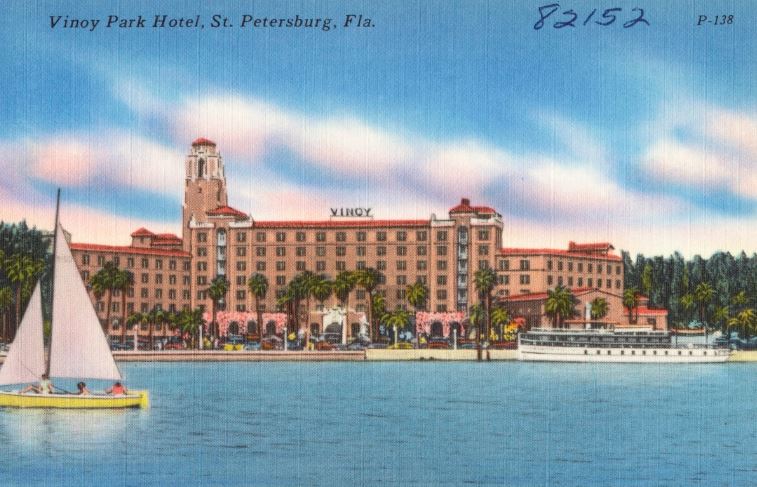 In each case the visiting baseball team had no idea that they were about to enter the realm of the paranormal. As the story goes, when a baseball team comes to Florida for training or for games, they often stay at the Vinoy Hotel when on the Gulf Coast because the players can get a great massage, and sit in the hot tub after a long day. On various occasions, however, when one or more of these durable athletes prepares to retire for the evening, he might just get an unexpected visit from a lady — A visit from beyond the grave.

In 2003, Scott Williamson of the Boston Red Sox was one such soul to have witnessed the lady in white. He claims to have been awakened in the middle of the night by a feeling that someone was in his room. At first he saw what appeared to be a faint light or glowing, and then he noticed a woman dressed in a style of clothing from the 1920′s or 1930′s. The spirit just stared at the shocked ballplayer until she faded away to nothingness.

Needless to say, Mr. Williamson had to endure some razing by his teammates later that day. Even the famous sports writer Joe Haakenson heard about the Vinoy hauntings, and began a hunt for the elusive specter in hopes of proving the stories true. Unfortunately, Mr. Haakenson never received a personal greeting from the lady in white, as so many other ballplayers had, but he still keeps an ear open for more of the ghostly legends whenever staying there.

There appears to be several legends about this lady in white, and who she was in life. One of the local and quite common beliefs is that she is the restless spirit of Elsie Elliott, a socialite, who was purportedly pushed down a flight of stairs by her wealthy land baron husband Eugene Elliott.

And, if that’s not too much like a soap opera, others believe that the apparition is actually that of the Elsie’s personal maid, who is said to have witnessed the murder. Not long after the event, the maid mysteriously vanished just before she was to testify to the crime. Another conjectured possibility is that she was a mistress of the famed baseball legend, Babe Ruth.

Though there is little evidence to support this theory, some feel that this lady would visit “The Babe” when he vacationed in Florida. Since he was unable to offer the love and commitment she desired, she either died regretting this, or she took her life as a result. Either way, she still lingers on in the hotel she once loved.

The hotel’s elevators appear to be haunted, also. Occasionally, when a lone gentlemen boards the elevator to go to his floor, all of the elevator number keys will light up, then douse altogether, except for the number five, which will then quickly take the confused passenger to the fifth floor. When the doors open, he finds an empty hallway and nothing else.

Though no one is entirely sure who this playful spirit may be, some have referred to it as the formal ghost, complete with top hat and tails. On yet another occasion, while a major league player was staying in the hotel, this formal ghost made his acquaintance by standing over his bed and pressing down on his back, as if to wake him. This understandably worked, as the beguiled ballplayer turned on his side to make sure he wasn’t dreaming.

He let his eyes focus just enough to see a tall, thin man wearing a nineteenth century-style top hat and frock coat, complete with tails. The mysterious visitor sported a waxed mustache, and had dark eyes that just stared down at him. Naturally, the poor ballplayer either thought someone was playing a trick on him, or that he must have been dreaming.

Finally, thinking it was one of his baseball chums having some fun; he sat up and turned on the light next to his bed. As soon as he did, the visitor disappeared. There was no trace of an intruder and the door was locked and the deadbolt secured. Since he was on an upper floor, no one could have possibly come through a window.

Although a mystery, this was certainly not the only occasion something like this had taken place. Similar events have happened to at least five separate baseball players over the years. Apparently, baseball is indeed the greatest American past-time — Even for the dearly departed.