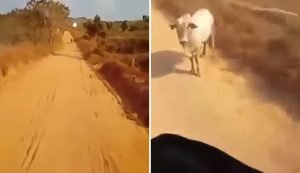 A unique video (see below) was filmed somewhere in the countryside of Argentina. The video was filmed on July 20, 2021, in the vicinity of the city of Chos-Malal, the Argentine province of Neuquen, but no further information is provided.

Presumably, the author of the video was driving along a rural road in some kind of slow village transport when he saw a white ball in front, which was hovering over a calf standing on the edge of the road.

This white ball descended to the calf and came very close to it, but then suddenly took off and began to intensively go into the sky, losing the brightness of the glow.

Presumably, the UFO flew away because people noticed it. When the author of the video drives past the calf, the animal looks unharmed.

If this video is real, then maybe there was an attempt by a UFO to kidnap a calf in order to mutilate it, and then throw a dead body somewhere nearby.

Since the first reports of animal mutilations, various explanations have been offered, ranging from natural decomposition and normal predation to cults and secretive governmental and military agencies, to a range of speculations, including cryptid predators (like the chupacabra) and extraterrestrials.

Mutilations have been the subject of two independent federal investigations in the United States.