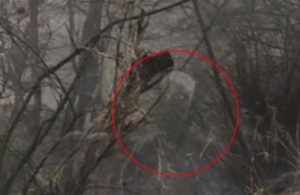 Some have already managed to call this video (see the video below) the best video of a ghost in many years, while others call it an overt montage, pointing to the “computer” movements of the object.

The author of the video, Rob Wakefield, filmed it near the city of Stansted Mountfitchet, Essex (England) and believes that this is the ghost about which many local legends have been composed.

One of these legends Rob heard in one of the city pubs. He was told that a few decades ago, late at night, an unknown young man decided to cut a path and went straight through the bushes.

Unfortunately, the guy probably forgot about the fact that the railway line was passing here, and when he suddenly found himself on the tracks, he was immediately knocked down by a passing train. The frightened train driver reported that a person had been hit, but when the police were inspecting the scene, they did not find anything there.

According to one of the versions, the body of the unfortunate was thrown into the river, and his remains are still found somewhere not mourned or buried by anyone. Therefore, it is not surprising that soon a wandering ghost was regularly noticed in this place.

The railway runs along the embankment, below which the river flows, and between the embankment and the river there are thickets of bushes and a narrow path along which local residents walk into the forest.

“According to the legend, this ghost can be seen on certain days, he wanders in the bushes between the rails and the river. When I went to this place, I recorded a video there, but during the shooting I did not notice anything unusual. Already later, watching the material, I saw this is a phenomenon that made my goose go all over my body,” says Wakefield.

The ghost is almost transparent and only the head and partially shoulders are noticeable.