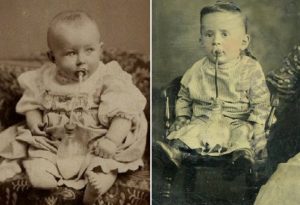 Many Victorian mothers, whilst no doubt intending to provide the best food and feeding methods for their young infants, tragically caused the deaths of their own babies, with the bottles eventually earning themselves the nickname of “murder bottles”.

They were most popular during the Victorian age in the UK because mothers at the time thought that having a bottle which could help their young child virtually feed him or herself was a godsend.

Although many women continued to breastfeed, bottle feeding offered an alternative to mothers who were unable to breastfeed, could not afford a wet nurse, or who wanted the freedom of not having to be accessible for feeding 24 hours a day.

In an age when corsets were popular and nursing a baby, even with a maternity or nursing corset, was considered a “challenge” to some, especially whilst also trying to maintain a picture perfect home and personal appearance, which proved to be very time consuming for new mothers.

With product names like ‘Mummies Darling’, ‘The Princess’, ‘Little Cherub’ or ‘The Alexandria’ giving the bottles an air of quality & safety, mothers at the time could be forgiven for being swept along with the marketing gimmicks.

However, the hidden dangers were there and over time these baby feeders became more widely known by names such as ‘The Killer’ or ‘The Murderer”.

They were made from glass or even earthenware with a rubber tube running from the nipple to the bottom of the bottle a perfect device to breed bacteria.

Not only were they were very difficult to clean, but many Victorian women turned to the advice of Mrs. Beeton, who in her popular book, Mrs. Beeton’s Household Management (1861), provided a go-to reference guide on how to run a Victorian household, which doled out advice on cooking, hiring and firing household staff, and child rearing… and she was advising that it was not necessary to wash the teat for between 2 or 3 weeks, allowing the deadly bacteria to flourish.

Doctors at the time rightly condemned the device, but mothers continued to use them anyway.

Although doctors had condemned the bottles, parents continued to buy and use them until 1920, despite them being first banned in Buffalo, New York in 1897, where they had acquired the nickname of “murder bottles.” After widespread condemnation by medical communities in the U.S. and abroad, many other cities and states followed suit.

This was a bad period for infants as only 2 out of 10 would live to see their 2nd birthday.