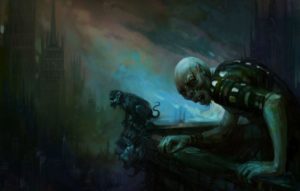 In the spring of 1788 a family setup housekeeping in the small mountain community of Dillsboro N.C. The family name was Alfort and there were rumors that they had descended from royalty.

They bought land by the river and built what was then a very nice large southern colonial home. Dr. Alfort opened up an office and pharmacy in a few rooms in the front of the house.

The local people were at first really happy that a new doctor had arrived in their community… but very quickly this attitude was about to change.

Two men both who had gone to the new doctor to be treated for gout suddenly died. Both men had been well-liked members of the community and the circumstances angered many of the residents.

However, in a short time the local minister had brokered peace in the community and everything seemed to be fine. Nevertheless, this calm was short-lived.

That Fall the young daughter of the minister was found dead in her bed with puncture marks to her throat. The minister’s wife swore she had seen a dark form hovering over her daughter and she screamed but it was too late and the child quickly succumb to the attack.

The incident caused a huge outcry in the town and the people of the area started to claim a vampire or a group of vampires was in their midst. For many nights groups of men ventured out and searched but found nothing.

Nevertheless, some men claimed to have seen a large black bat-like creature fly over them. A few nights after the sighting a young boy ran down the hill to his grandfather’s house and proclaimed that something was up the hill in his house attacking his parents.

The grandfather summoned other men and they ran to the house but only found the parents and their two young daughters, who were dead with puncture wounds to their necks. The area was immediately alerted… soldiers were called in and searched the area. By February of 1789 the community had quieted down.

Then one evening screams were heard and when men arrived they witnessed a black form of a human run from the house, run down the hill and into the Alfort house. When the village men went into the house where the screams had come from they found the bodies of a young couple with vicious bite marks to their throats.

However, as soon as the sheriff arrived they dragged Dr. Alfort outside and tied him to a tree. When the men entered the house they were surprised at what they found. The upstairs bedrooms each had beds but it was clear that no one had slept in them.

When the sheriff and search party went downstairs they found three caskets and Mrs. Alfort, who was dressed in black, lying in one of the caskets and very much alive. She hissed and cursed at them as she was pulled from the casket.

Later that night the sheriff and the village minister announced to the crowd assembled outside the Alfort house that the Alforts and their son were vampires.

The Alforts were summarily hanged and then placed back inside the house. The house was set on fire and burned to the ground. Nevertheless, the couple’s 15 year old son was not found and never seen in the area again. There were no further unusual murders in the area.