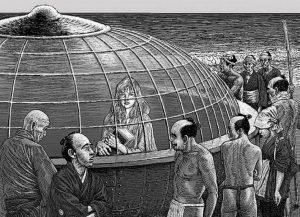 The Japanese legend of the Utsuro-bune (“hollow ship”) is claimed by ufologists as one of the earliest recorded close encounters of the third kind in existence.

This legend is detailed in an early nineteenth-century document known as “Hyouryuukishuu” (translated “Tales of the Castaways”), a collection of stories and tales describing the adventures of various Japanese fishermen who claimed to have visited unknown lands while being lost at sea.

The most striking account found among these legends is that of the Utsuro bune, as it chronicles an extraordinary alien encounter that was reported to have taken place in February of 1803.

According to the legend, a strange craft washed up on the shore of a small village known as Harashagahama (located on the eastern coast of Japan). The object was roughly 10 feet high and 17 feet wide, and was round in shape.

This strange object naturally attracted a lot of attention from the local villagers, and many spectators flocked to the shore to see what the fuss was all about. The object became known as the Utsuro-bune (“hollow ship”) due to the common reports of its hollow interior, as described by several villagers.

The interior walls of the craft were described by witnesses as being decorated with inscriptions written in an unknown language. After observing some of the other aspects of the craft’s interior (such as bedding and foods), a woman emerged from within the craft. 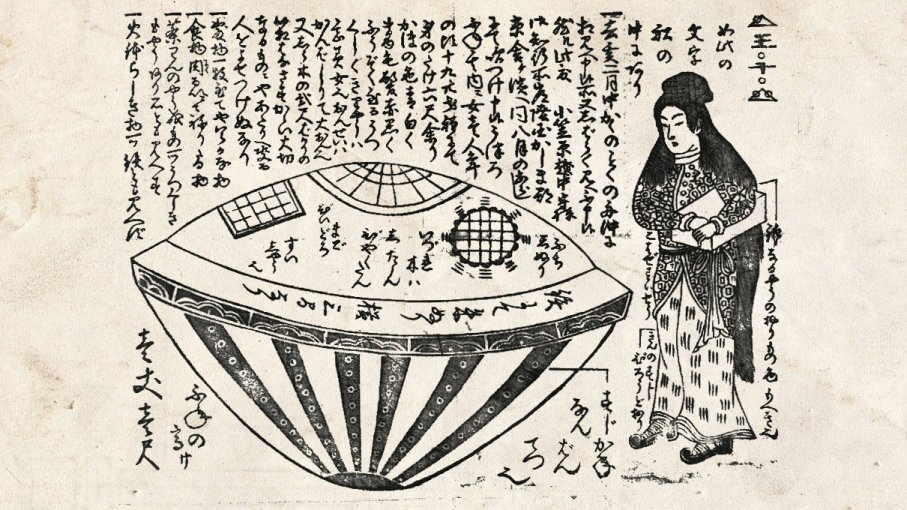 The legend describes her as being young (approximately 18-20 years old), very attractive, and of a friendly demeanor. Her hair and eyebrows were red in color, and her skin was a very pale pink hue.

She wore long, flowing garments that were described as being made from extremely high-quality materials of unknown origin. She attempted to communicate with the fishermen, but she spoke in an unknown (and perhaps otherworldly) language.

One of the most mysterious aspects of this encounter revolves around a rectangular-shaped box that the woman kept within her grasp. The box was roughly two feet long, and was comprised of an unfamiliar light-colored material.

Although she could not successfully verbally communicate with the fishermen or the villagers, she made it clear through her mannerisms that she would not allow anyone to touch or hold the box, even when asked kindly.

Many ufologists speculate that this box was some type of extraterrestrial object or device that may have had a power of its own, or may have contained some type of significant alien technology.

Since every version of the legend confirms that the young woman simply would not let the box out of her grip, one can only speculate as to what exactly it was, and what its purpose may have been.

The majority of the stories in these books are considered to be folklore or “pulp fiction”, but they remain significant because it has been confirmed that both books were written long before the modern UFO era emerged.

The Utsuro-bune incident definitely has its skeptics and detractors, many of whom claim that the woman was not an extraterrestrial being, but rather a foreign princess who had been banished from her homeland on a special round-shaped boat.

Supporters of the extraterrestrial perspective frequently point out that the many drawings detailing the incident depict a craft of obviously supernatural origin, carrying more of a resemblance to a flying saucer than a mere boat. These drawings are often referred to in the UFO community as some of the earliest visual depictions of UFOs on record.

Although there are quite a few books and documents that mention the Utsuro-bune, the incident has not been acknowledged by any official Japanese documents. Unfortunately, at this point there are more questions than answers regarding the validity of the Utsuro-bune incident.

Was the craft truly a UFO, or was it simply an embellished version of a boat? Is it possible that the folklore surrounding the incident is indeed based in truth, or can it be explained away as nothing more than a woman who had been lost at sea? We may never know for certain, but in any case, no one can deny that the Utsuro bune incident has carved out a special place in paranormal history.