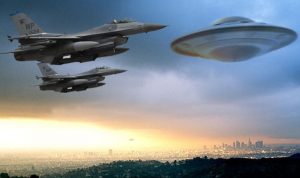 It has recently emerged that the Pentagon was involved in a $22 M secret project known as the Advanced Aviation Threat Identification Program between 2007 and 2012, which was set up to investigate plausible sightings of unidentified flying objects across US airspace.

Among these were reports of unknown objects traveling at impossible speeds without any visible means of propulsion or floating without any apparent means of lifting by U.S. military pilots. Now it seems as if the reporting process of a UFO has just become a little easier as evidenced by the upcoming implementation of a new formal reporting process.

“There have been a number of reports of unauthorized and/or unidentified aircraft entering various military-controlled ranges and designated air space in recent years,” a spokesman told Politico.

“For safety and security concerns, the Navy and the [US Air Force] takes these reports very seriously and investigates each and every report. As part of this effort, the Navy is updating and formalizing the process by which reports of any such suspected incursions can be made to the cognizant authorities.”

“A new message to the fleet that will detail the steps for reporting is in draft.”

Exactly what this means to investigate military UFO sightings remains unclear, but if they have seen something, at least more pilots are likely to come forward.

“Right now, we have situation in which UFOs and UAPs are treated as anomalies to be ignored rather than anomalies to be explored,” Chris Mellon, former Pentagon intelligence officer, said.