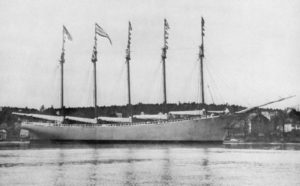 Carroll A. Deering was a five-masted commercial schooner that was found run aground off Cape Hatteras, North Carolina in 1921 with the crew nowhere to be found. The Deering is one of the most written-about maritime mysteries in history.

The night of February 1, 1921 was calm and quiet at the Hatteras Coast Guard Station. The breeze was light. Some of the men played cards and swapped tales. The lookout saw nothing unusual; no ships’ lights and no distress signals.

When morning dawned, the lookout was astonished at what he saw which is still one of North Carolina’s greatest mysteries. There was a schooner with five masts by the Outer Diamond.

Its sails were unfurled. He looked through a telescope and saw that it was aground and each wave was pushing it deeper into the sand. He sounded an alarm.

The men rushed to the ship. They were puzzled. No ship lights had been seen and the captain of the grounded ship had not sounded a distress signal. No one was on the deck and there was no response to their calls to the crew. The ship’s name was the Carroll M. Deering. The sails looked new, as if the ship were on her maiden voyage.

The men returned to the station. One of the laws of the sea is that people do not board a ship without the captain’s permission. The ship was not in immediate peril.

When the stationmaster looked at his register of ships, he learned that she was built in 1920 and she had left the port of Bath, Maine. The owners were contacted and gave their permission for the men to board the ship.

What the men found when they boarded the ship was eerie. The captain’s and first mate’s quarters were in order. Liquor had not been touched. In the dining room, the table was set. Plates with uneaten dinners were still on it.

Full serving dishes rested on them. In the galley, food was still on the stove. They heard a scratching noise and found a large grey cat, the only living creature aboard. The men rescued the animal.

What further added to the mystery was the fact that there was no navigational equipment aboard: no map, no telescope, no sextant, no no quadrant and the ship’s log were missing. The steering mechanisms had been smashed with a sledgehammer.

A complete investigation was done. Captain William Merritt commanded the ship. He was highly respected and well-liked. She left Bath in the summer of 1920 to go to Rio de Janeiro with a cargo of coal. They reached Lewes, Delaware and Merritt took sick. He left the ship.

Captain William Wormell, another popular and respected seaman, took command of the ship. He was accompanied by his first mate and eight other crew members. 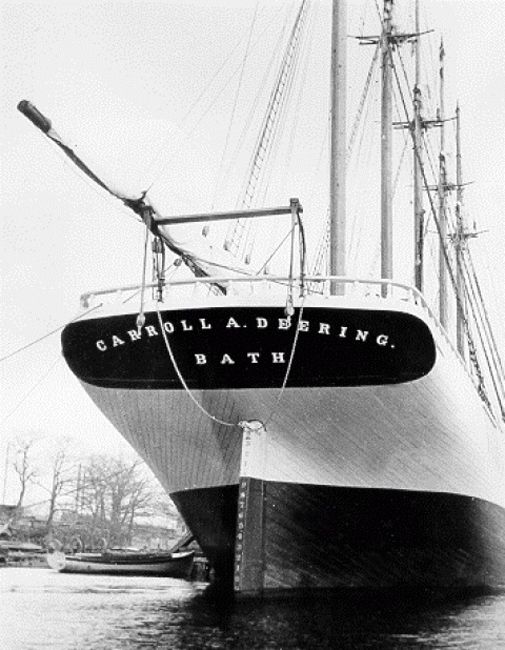 The ship reached Rio on December 3rd and delivered its cargo.

The first port they reached on the return trip was Bridgetown, Barbados. Order were to go to Norfolk without cargo. While Wormell was on the island, he confided to the ship’s agents that he felt uneasy about the return trip. The crew was not cooperative; he felt ill.

The ship left Barbados on January 9, 1921. On January 23rd, she reached Cape Fear. On the 29th, she passed the Cape Lookout lightship. Why did it take six days for her to travel 80 miles? Later, during the investigation, some residents of Bridgetown said they overheard ship’s sailors say they would “get the old man.” Old man is a term of respect for a ship’s captain.

The captain of the Cape Lookout lightship later reported that he saw a man with a megaphone on the ship’s deck who shouted that she lost her anchors in a storm and wanted other ships to be told so there would be no collisions. The captain was baffled. The man did not look like ship’s officer and the crew meandered about on the deck. There had been no recent storms.

After the initial investigation, the waters on the coast were searched, but there was no sign of any bodies or survivors. This was the most extensive investigation to take place and involved at least five government agencies. One chart was salvaged from the ship. Wormell’s daughter looked at it and said that the notations made after January 23rd were not in her father’s handwriting.

There were two theories put forth. One was that pirates captured the ship. This was rejected because the ship had no cargo. Another one was that the crew committed mass suicide because they developed a tropical disease. But, the lifeboats were missing.

No official explanation for the disappearance of the crew of the Carroll A. Deering was ever offered, though all of the concrete evidence suggests mutiny. The case is a favorite of paranormal and Bermuda Triangle hobbyists and has gained a reputation as one of the truly great maritime mysteries.

There are people who claim to have heard the voices of the captain and crew of the Carroll M. Deering cry out for help during the gales of February.