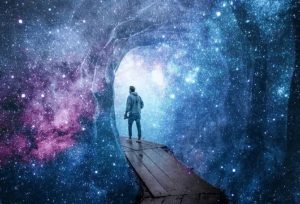 Albert Einstein and Stephen Hawking, the most famous physicists of the twentieth century, spent decades trying to find a single law that could explain how the world works on the scale of the atom and on the scale of galaxies.

Physics professor at Brown University Stephon Alexander decided to take over from the great scientists. In the preprint, Alexander and the research team took a different approach to this problem.

Instead of trying to figure out what the laws of physics are at work in the universe, they wonder why the physical world is governed by certain laws, and not by some other.

As a result, the researchers came to the conclusion that the physical world is not the only true reality, it is the result of many repetitions of the Universe trying to establish laws that did not work. According to Alexander, our universe has probably acquired the characteristics of many possible universes. It ended up “in a configuration … that was stable” and allowed it to “evolve consistently.”

The universe is always able to “keep trying.” In this respect, the Universe “learns” what works and what doesn’t as it develops. Since the universe does not have a teacher, but it learns its lessons along the way, researchers call this “self-education.”

“The strangest thing about this is that hardware is software and software is hardware,” explains Alexander.

General Relativity and the Standard Model came later, once the universe had the stability it was looking for. He compares this idea to Darwin’s theory of evolution.

The team started by understanding that physical theories can be viewed as matrix models. A vast matrix could contain all the possible laws that could govern the universe.

“The mathematics of matrix theory seems to contain some of the components of a particular type of neural network,” Alexander told New Scientist.

“Maybe there is some input and some output, and the universe is adjusting everything so that [it] eventually learns the standard model … and gravity,” he told Interesting Engineering.

If Alexander is right, then we humans are unable to see everything the universe has learned.

“There may be other corners of the universe where other interesting things have happened that are completely radical from our point of view,” he said, pointing out that there is no reason to believe that the universe chose to study the laws that allowed life and consciousness to arise.

Confirming a theory of a self-learning universe would not necessarily rule out Einstein’s or Hawking’s theories, but it would definitely confirm that physicists should explore ideas that go far beyond traditional boundaries.