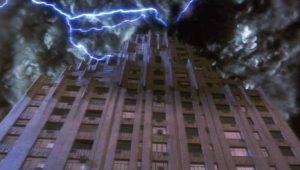 I worked at the old Union Trust building in New Haven, CT from 1993-1999. But I’ve been visiting the building since 1984. From the very beginning, it was obvious to all something was very wrong within its walls. We soon learned, that for decades the building had been encapsulated with paranormal activity.

The Union Trust building, has the ability to channel spiritual activity and channel peoples thoughts during periods of religious or emotional conflagration. But it also unleashes its entities at times of great joy, or during days of complete tranquility.

There was a young secretary that worked on the 10th floor. Her office was at the end of a long hall. One night during the late 90’s, the guard was doing his midnight round. The entire building was locked and empty. As the guard turned the corner on 10, he saw a young man walk into the secretaries office.

Alarmed and nervous, the guard said “Hello” “Hello” and walked towards the office door.

As the guard approached, he noticed the room was empty and dark.

The next day, we discovered that the secretaries brother, was killed in a hiking accident in northern New England the night of the apparition.

During a night of religious metamorphosis, I was doing my 1:00 AM round. As I was walking down the hall on 7, I saw a white ball run out from an office to my right, dart across my feet and vanish into an office a few doors ahead. I’ve been told about this entity before, but seeing was believing! I tried to muster my courage to complete the round, left to ponder the ability of the spiritualism within the building to connect with my feelings.

The marble lobby of the Union Trust building, with its brass elevators and doors, gives one the feeling of being in a catacomb. The guard was in that lobby one morning, saying the rosary. He then decided to complete his 5:00 AM round. Beginning on the 12th fl, all was silent until he reached the mezzanine.

As the guard was approaching the elevator, he saw a man in a gray suit float in front of him and vanish into the glass walls.

After years of working there, it was one of his most frightening moments.

On a damp March night in 1999, I was going through a major change and it was for the better. As I was standing near the marble staircase in the lobby, I heard steps coming down towards the me.

Knowing the staircase only went to the 3rd floor in a building of 12, and understanding it was 1:00 AM and the building was empty, I was shocked to hear the walking. I said “Hello” “Hello” but no answer. I walked up and no one was there.

All the doors were locked. My heart was beating in my mouth! It was the most amazing thing to hear. Then at 2:30 AM, I was still in the lobby thinking about what I heard. At that exact moment, I heard heavy walking over my head in the mezzanine. The entity was able to connect with my thought. It left me in fear for many nights.

During a warm and sunny late Saturday evening, I was doing my round on the 6th floor, which has been abandoned for over a decade. Walking down the hall to the old Greenfield office, which is now used for storage, I unlocked the doors to enter.

Going into the room on my right, I noticed a collection of antique New Haven phone books, going back to the 1920’s. Before I looked, I saw a black book. As I picked it up blowing off the dust, I realized it was in German. When I opened it, I understood it to be an old autopsy book, with awful looking illustrations.

Curious, I thought to myself, I’ll bring it down to the lobby and look through it. Just as I thought to take it out of the room, two antique phone books flew off the shelves. Terrorized, I placed the book down and said “Sorry” and backed out of the room, running for the doors. I felt as if I was being chased until I got the doors locked. I never entered the old Greenfield offices again.

Once on the 4th floor, a young couple were looking at one of the empty offices. The gentleman has worked in the Union Trust for 15 years, and wanted to show his new lady (who would become his wife) around the building. He just got over a period of sadness, and was so happy to be in love! As he was teasing her in the office, they simultaneously heard “Hey Look, Its David” They both froze in fear, looking at each other.

The voice came from within the office. It was as if the entities were taking great joy in David’s new found happiness.

Lawyers would call the lobby at night, and ask if there were other people in the building. Telling them they were the only one, we would question their concern. They would always say “I heard someone talking near my office as I was coming from the restroom.” People would also hear toilets flushing when the bathroom was empty, lights turning back on after being off. One could hear the low din of voices, or their name being called. Many refused to ever enter the building again! And others quit their jobs.

Trying to answer the question “why” is very difficult. Maybe The Shining put it best, when old Hallorann was talking to Danny in the kitchen about the negative energies within the Overlook Hotel.

“Danny: Is there something bad here? Hallorann: Well, you know, Doc, when something happens, you can leave a trace of itself behind. Say like, if someone burns toast. Well, maybe things that happen leave other kinds of traces behind. Not things that anyone can notice, but things that people who ‘shine’ can see.

Just like they can see things that haven’t happened yet.

Well, sometimes they can see things that happened a long time ago. I think a lot of things happened right here in this particular hotel over the years. And not all of ’em was good.”