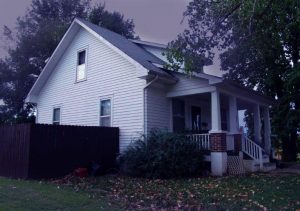 Of all ghost related paranormal phenomenon the large majority are sightings of entities that don’t seem to even be aware they are visible, then there are those poltergeists that have seemingly learned to interact with physical matter and use this to attack.

More rare, but most terrifying of all, are those in between: the entities that know you’re there and are content with intentionally terrifying their victims in any way they can. This is the case with one such ghost in Union Missouri. Welcome to The Union Screaming House…

The story of the Union Screaming House starts in the same manner many a terrifying story begins: “I needed desperately to find a place for myself and three children to live”, and of course the family was offered a great deal on an antique house complete with an antique butcher’s workroom in the basement.

When Steven LaChance and his family first visited 809 North Christina Ave, he got what could have been considered the first of many veiled warnings when the owner at the time enquired “You understand the responsibility that comes with living in an old house such as this?”

LaChance states that in retrospect there was an odd emphasis put on the enquiry, but excited for the opportunity he simply replied “Oh, yes I understand. It’s beautiful.” Upon moving in, these ominous veiled comments were being made by neighbors. LaChance’s daughter commented that she began to notice the way that people from the community would go out of their way to avoid the house.

There were physical oddities about the house as well, each door on each room throughout the entirety of the house was fitted with a hook and eye latch to lock the doors from the outside. These locks were meant to keep something in the rooms, not out of them.

Within a week of settling into the new home, Steve’s young son had ventured into the basement where he encountered “something”. He ran from the basement screaming in terror and upon questioning told his father that a formless creature he couldn’t describe had approached him and chased him up the stairs.

Whatever he had seen was enough to cause him to urinate himself. Children imagine things such as this all the time and his parents assumed it was just that until they started seeing it too. At first, it was that same formless mass, but soon it began to take more specific forms, and phenomenon within the house increased exponentially.

Cold flashes were experienced by all members of the family coming and going through rooms in no more time than a few minutes. Steve had locked a few of the doors using those original hook and eye latch’s to designate the rooms as off limits for the children, but this caused the doors to shake and rattle. A sound he compared to a warzone.

Possibly the biggest mistake was Steve’s acknowledgment that he now lived in a haunted house. Being your average protective father, he challenged the entity, insisting that it leave his family in peace.

This ended with the family fleeing the house and locking the door behind them, only to be met by the sound of a man screaming uncontrollably from behind the door. Steve recounts that it was loud enough for dogs across the neighborhood to begin barking and howling.

As the family got into their car and began to drive away they could still hear the screaming and a terrible booming noise throughout the house. Through the windows they could see a smoky black mass moving from room to room as though searching for them.

That was the last night they would live in the house. Steven returned on a few occasions, but never alone, and the children were never again brought to the house.

Normally we would not cover a story where the causes and history are so obscured as to almost be non-existent, but in this case later evidence becomes entirely overwhelming. Over the years the house remained vacant for months at a time with new tenants staying no more than a few months themselves.

These tenants are not willing to discuss what it was that pushed them from the house, but on more than one occasion it was enough to warrant a visit from the police who took statements from a terrified family staring back at their house from the lawn.

Today the property is a dog kennel and although people are often in the home, none stay the night. Many have taken photographs inside the property and it is near impossible to take one that does not include some form of anomaly.

There have been investigations from a handful of paranormal societies, some turning out EVP recordings that chill to the bone. Those that have visited the home whether they are investigators or kennel staff have a single shared belief of what it is at 809 North Christina Ave, The Union Screaming House. Some say it is demonic, and others believe firmly that it is Union Captain John T. Crowe, but they all definitely agree on “evil”.