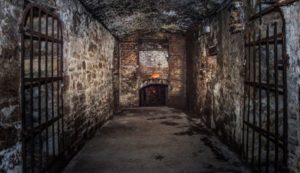 The underground vaults are vast, man-made caverns where the working class once labored and lived, situated in tunnels built in the 18th century underneath one of the arches of the South Bridge in Edinburgh, Scotland, which was completed in 1788.

For around 30 years, the vaults were used to house taverns, cobblers and other tradesmen, and as storage space for illicit material, reportedly including the bodies of people killed by serial killers.

A few ghostly personalities have made their presence known in some not-so-subtle ways. Other investigations have reported unusual energy readings and photographs taken by tourists reveal orbs or white markings.

The story of how the vaults came into existence actually starts 40,000 years ago during the Ice Age. On the great hill, where Edinburgh Castle stands watch over the city, a volcano once stood.

As the rivers of glacial ice encountered the hardened volcanic rock of the mountain, the glaciers split and went around either side of the great mound, carving deep valleys on both sides and then coming back together again, forming a teardrop-shaped piece of land that escaped glacial erosion.

Geologists call this a “crag and tail.” Evidence of the site being a military outpost goes back almost three millennia. Given that there are steep cliffs on three sides and a long sloping hill to the top, the position is highly defendable.

A fortress of stone was constructed sometime during the reign of Malcolm III (1058 to 1093 C.E.). As Edinburgh’s population grew, people naturally wanted their homes to be as close to the Castle as possible, for protection. The homes were built very closely to one another, and they covered every piece of climbable land surrounding the Castle. 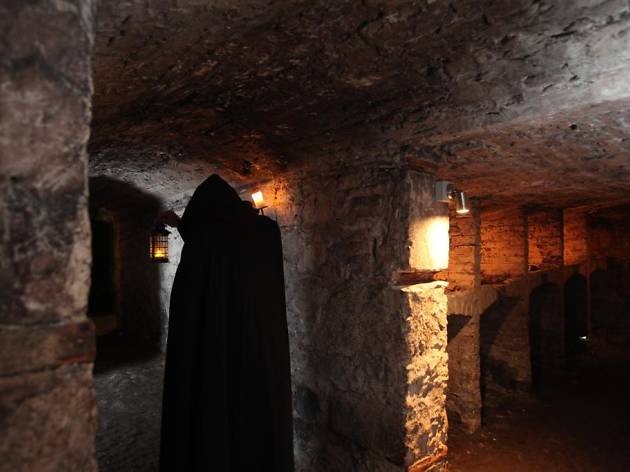 In the late 18th century, it was decided that two great bridges would be constructed to span the deep valleys on both sides of the old town of Edinburgh. The first bridge was erected over the northern valley in 1772 and called the North Bridge.

In 1785, an even longer southern bridge, with 19 arches supporting the road, was built to span the ravine of the Cowgate; it was named the South Bridge. Both bridges connected Edinburgh to new, level land, where grid street systems could be laid out to accommodate the population growth of the city.

On either side of the bridges, tenement buildings were constructed immediately adjacent to the bridge. With buildings on either side, the arches would be enclosed, forming the Edinburgh vaults. The tenements were so predominant they almost entirely masked the bridge.

The vault rooms, used as storage space and workshops for the South Bridge businesses, operated as intended for a relatively short space of time. Construction of the bridge had been rushed and the surface was never sealed against water. The vaults began to flood.

Over the decades, the Scottish rain leaked through the bridge into the lowest parts of the vaults, spreading illness and death. As prosperity grew for the merchants who lived and worked on the South Bridge, many were able to move their living quarters to better housing. Those who couldn’t afford to move found themselves in what was fast becoming a slum.

Abandonment of the vaults began as early as 1795. With the vaults being gradually abandoned by the businesses on the bridge, the empty rooms were adopted and adapted by new users. By the 1840s, the city council resolved to remove all of the legal residents, which meant the caverns would become a haven for the poverty-stricken and the underbelly of Edinburgh.

During the Irish potato famine of 1845–1847, the destitute Irish came over to Scotland in droves. They had no money, no employment, and very few prospects, so they settled in the vaults. Prostitution, whiskey stills, gambling, fights, and murders were all taking place in the vaults in the latter half of the 19th century. By the early 20th century, the vaults were sealed off, eliminating the refuge of Edinburgh’s dark side.

In the 1980s, the vaults were rediscovered by former rugby international star Norrie Rowan, who owns some property that includes a section of the vaults. Rowan crawled through an opening and discovered part of an underground city. At Rowan’s invitation, and after some cleanup and electric light installation, Mercat Tours began offering historic walks through the vaults.

But they found more than just some great history. Des Brogan, one of the founders of Mercat Tours and a former history teacher said, “The more people we took down there, the more things began to happen.

If they [people on the tour] were at all sensitive to the other world, they would feel very uncomfortable. On one occasion, we took somebody down who later told us she was a medium, and she identified a number of ghosts that she had seen down there.”

The accounts of ghost encounters continued to accumulate over the years. The stories reinforced each other, and many people were seeing different aspects of the same characters. The ghosts of birds and even a shaggy dog plopping itself down at visitors’ feet has been reported in addition to the human spirits. A few of these human spirits definitely stand out.

The frequent reports of paranormal activity and ghost sightings resulted in the UK paranormal entertainment show, Most Haunted, to investigate the vaults in both a 24 hour investigation and for a Most Haunted Live show on Halloween 2006. The television show Ghost Adventures investigated the vaults and claimed to have numerous encounters with spirits there.

There are a number of [spirits of] children who run around. “Jack” is the ghost of a little boy reported to be in late 18th-century dress and wandering the arches. “We think he was killed during the construction of the bridge, and his spirit is still within the confines of the vaults,” Brogan said.

The darkest and most notorious presence in the vaults is that of Mr. Boots. If someone seems intentionally frightened, or if a psychically sensitive person feels threatened, it’s attributed to Mr. Boots. “We call him that because he wears knee-length boots, very rough trousers that fit into the boots, and a very dirty ruffled white shirt,” Brogan said. 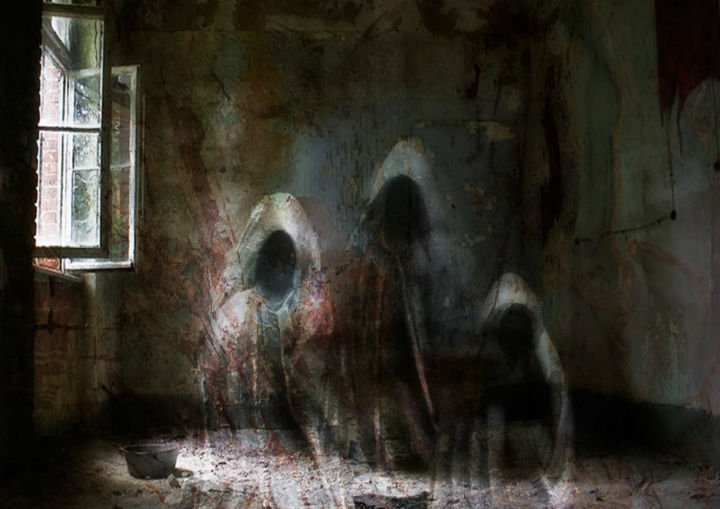 “He’s unkempt and unshaven, and he has very bad breath. We know this because people can smell it. If our guide is telling stories, he will appear behind the group. And only some people in the group will see him. But as soon as he’s spotted, he disappears.”

Mr. Boots seems particularly connected to one room of the vaults. Several of the mediums who have investigated Mr. Boots’s room believe it to be a crime scene. Brogan believes Mr. Boots feeds off of the energy from the groups of people. On occasion, Mr. Boots has been reported to act out.

Brogan said, “On a number of occasions, he has shown his unhappiness by switching off all the lights. There’s absolutely no reason why there should be light failure, but the lights all go out. And not only that, the candles go out as well,” leaving the guide and the group in complete darkness, entombed in a stone cavern.

The guides are careful to forewarn about Mr. Boots. Brogan has never seen Mr. Boots, but he has heard him. “He stomps along the various corridors in the vaults, and you can hear him walking.” Brogan has also reported feeling drastic temperature changes between different rooms of the vault.

One scientific explanation for some of the underground experiences is linked to the fact that South Bridge is a heavy traffic route to the City. The traffic flow above creates vibrations which in turn create spectra that could be associated with sensations people experience while on ghost tours in these underground vaults.

The underground vaults of Edinburgh are a place where the poorest of the poor sought shelter. Against all adversity—disease, crime, and no employment—some of the denizens of the vaults would prevail to a better way of life. Sadly, some not only made the vaults their home, but their tomb as well, and these poor souls may never leave.