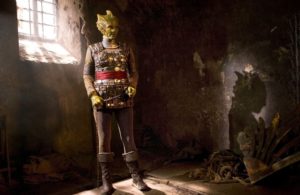 Deep beneath the heart of Los Angeles’ financial district, hundreds of feet below the huge downtown edifices that house banks, corporate offices, and government agencies, lies another city remembered only in obscure Indian legends, an underground world built by a strange race that vanished five thousand years ago.

At least that’s what mining engineer W. Warren Shufelt claimed in the January 29, 1934 edition of the Los Angeles Times. According to reporter Jean Bosquet, Shufelt was ready to dig up downtown L.A. in search of this ancient subterranean civilization.

Shufelt had first heard of the city in a Hopi Indian legend about the “Lizard People.” They were a fabled lost race who had who had nearly been wiped out after a meteor shower rained down on the Southwest back around 3,000 BC. (Arizona’s famous Winslow Crater was said to be Ground Zero of this fiery deluge.)

The Lizard People constructed thirteen subterranean settlements along the Pacific Coast, to shelter the tribe against future disasters. These underground cities housed a thousand families each, along with stockpiles of food. As the story had it, the tribe used a “chemical solution” that melted solid bedrock to bore out the tunnels and rooms of their subsurface shelters.

Along with housing their people in the event of a disaster, the tunnels were also constructed to hold a trove of golden tablets that chronicled the tribe’s history, the origin of humankind, and the story of the world back to creation. Shufelt was particularly interested in these tablets for both pecuniary and archeological reasons.

In 1933, after surveying the area, Shufelt occupied the Banning property at 518 North Hill Street and sank a 350-shaft straight down, digging for what he said was a “treasure room” directly underneath. Shufelt said that he had located gold in the catacombs below with the aid of his “radio X-ray.”

This peculiar instrument, which was sort of a tricked-up dowsing rod, had also helped Shufelt map the location and extent of the underground tunnels. He said that the subterranean city was shaped like a giant lizard, with the head in the vicinity of Chavez Ravine (the present location of Dodger Stadium), and the tail tapering out beneath the Central Library.

The “key room,” the chamber that contained the map of the city and the directory to the gold tablets, lay several hundred feet under the present site of Times-Mirror Square. Shufelt also claimed that he’d traced passages stretching to the area around the Southwest Museum, and said that ventilation tunnels extended westward, opening at the Pacific Ocean.

Despite all his extensive mapping and plotting of the treasure-filled underground city, Shufelt never actually found it. Shortly after the Times story appeared, the project, which had been authorized by the City Council over a year earlier, suddenly ceased, and Shufelt and his cohorts disappeared.

The whole mysterious, improbable business was written off by a hoax, and quickly forgotten. Since then, inexplicable tunnels have been unearthed in downtown Los Angeles, but they’ve usually been explained away as the work of smugglers hiding illegal Chinese laborers in the 19th century.

But Shufelt wasn’t the only modern Californian who believed that an ancient underground city lay beneath Los Angeles. As a postscript to this strange little tale, let’s look at the vision of Miss Edith Elden Robinson of Pico Rivera, which appeared in the highly respected American Society for Psychic Research’s journal.

On the evening of December 22, 1933, five weeks before Shufelt’s excavations hit the pages of the Times, the clairvoyant Miss Robinson envisioned that under Los Angeles lay “a vast city…in mammoth tunnels extending to the sea-shore.” She said that the tunnels had been constructed by a vanished race to protect themselves from danger, and to provide access to the sea.

Who knows? Maybe this fabulous subterranean city really existed. Perhaps it’s even populated with latter-day Lizard People who live hidden and unsuspected hundreds of feet below modern-day Los Angeles, emerging only furtively to watch the 21st-century barbarians slowly strangle their own surface-level civilization with smog, traffic and urban sprawl.