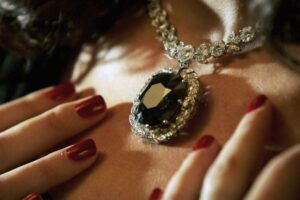 The hypnotic deep “gun-metal” tones of this legendary black diamond struggle to hide the reflections of a very dark past, beginning with a theft from a Hindu idol and resulting in no less than three mysterious suicides.

According to legend, the Black Orlov Diamond originally rough 195 carat came from India in the 19th century as one of the eyes of Brahma (the Hindu God of creation) statue in Pondicherry. That’s why this diamond is also known as the Eye of Brahma Diamond.

However, the real history of the diamond remains unclear. It is said one of the eyes was stolen by a monk, after that the rumor about the diamond being cursed began to spread. It is believed whoever own the Black Orlov Diamond will suffer violent deaths. 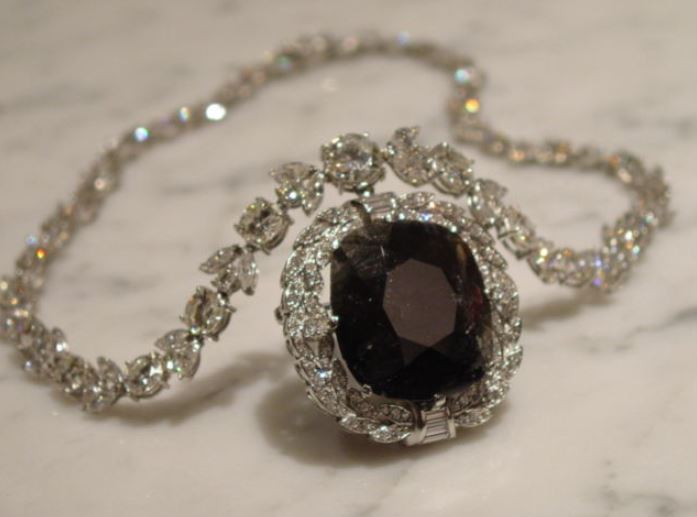 Whilst many are skeptical about the existence of such a curse and its beginnings are thought to be little more than folklore, the journey of the diamond from here is still an interesting one that is shrouded in mystery, drama and death.

The first known victim of the cursed diamond was J.W. Paris, a diamond dealer. In 1932 he has imported the precious stone to America. Few days later after he arriving and sold it to the buyer in New York City, he committed suicide by jumping from the top of Manhattan skyscraper.

It is rumored that J.W. Paris had been suffering from extreme anxiety due to business worries, and that two letters were found in his possession at the time of his death, one addressed to his wife and the other to a fellow jeweler, but no details of either contents were ever made public.

In 1947, Princess Nadia Vyegin-Orlov was said to be the former owner of the Black Orlov – which the cursed diamond gets its name – leaped to her death in an apparent suicide from the top of a building in the city of Rome.

Only one month previous to Princess Nadia’s death another member of Russian royalty, Princess Leonila Viktorovna-Bariatinsky had also committed suicide.

At the time of her death Princess Leonila was married to Royal Navy Officer Prince Andre Glinstine, however there was no details are on record as to the reason why she killed herself, although it was later discovered that she had been the owner of the Black Orlov Diamond.

After several mysterious deaths that have happened to the previous owner, the diamond was re-cut into three separate gems in an attempt to break the curse and since then the new private owners seem to have escaped the curse. Now it only weighs 13.50 g (67.50 carats)

Dennis Petimezas, the current owner of the Black Orlov Diamond said, “In the middle of the 20th Century, the media christened it the ‘Evil Death Gem’ but I’ve never felt nervous about owning the Black Orlov. I’ve spent the past year trying to discover everything I can about the stone’s melodramatic history and I’m pretty confident that the curse is broken.”

The Mystery of Burke and Hare Murder Dolls