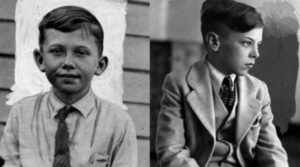 Walter Collins Sr. was a criminal who had a notoriously quick temper, and in 1928, whilst he was serving a sentence in California’s Folsom Prison for a series of armed robberies, his son, nine-year-old Walter Jr. vanished.

Walter Collins Jr went missing on March 10, 1928, after being given money by his mother to go to the cinema,and the authorities believed one of his father’s enemies had taken his son as revenge.

A massive investigation found no sign of Walter until five months later, when a boy found in Illinois claimed to be the missing child. He was returned to Christine, but when she insisted the boy was not her son, Los Angeles police captain J.J. Jones dismissed her claims and forced the now under pressure and less certain Christine to take the child home with her.

Three weeks later, she returned to the LAPD to say she was absolutely certain the runaway was not her son. Jones accused her of shirking her duty as a mother. She persisted in her claims until she was locked up in the psychiatric ward of the Los Angeles County Hospital.

Finally, the boy admitted that he wasn’t Walter and was in fact Arthur J. Hutchins. He’d only claimed to be so that he could get a free trip out to California to meet his favourite movie star, Tom Mix.

Christine Collins was released after ten days after Hutchins admitted that he was not her son and she filed a lawsuit against the Los Angeles Police Department. Collins went on to win a lawsuit against Jones and was awarded $10,800, which Jones never paid, but she never saw her son again. Walter Collins Jr.’s ultimate fate is unknown, although it is believed that he was probably a victim of the sadistic serial killer Gordon Northcott, known to be active in that area at the time, in what became known as the Wineville Chicken Coop Murders.

Hutchins, the boy that impersonated spent more than two years in the Iowa State Training School for Boys in Eldora, Iowa, as a result of his actions.

Christine spent the rest of her life searching for her lost son without success and died in Los Angeles on December 8, 1964, at the age of 75.

The events of the disappearance were dramatised in the 2008 film Changeling, which starred Angelina Jolie.