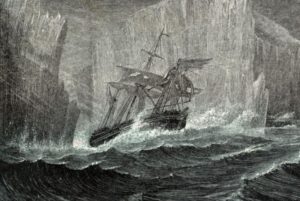 In the mid-1800s a strange ship was discovered by Captain Brighton of the whaler Hope in the waters of the Southern Ocean between Australia and Antarctica. In front of the whaler, that ship was slowly floating out of one of the chasms that had opened up in the disintegrating walls of ice.

Its decks were wreathed with ice and snow, its sails hanging in tattered and frozen shreds, its rigging broken and rotten, and the vessel itself crushed and splintered, but still she floated. What terrified Brighton’s men was the crew of the wreck-ship in front of them: seven men standing upright and encased in steel-hard ice, like so many statues of stone.

On September 22, 1860, Captain Brighton of the whaler Hope entered into his logbook the fact that a whale had been sighted and chase given, but when they had drawn close to the ice barrier, the whale had given them the slip.

An hour later Brighton wrote another report that later would stun and mystify all those familiar with the sea. He had just come on deck when the nearby endless wall of ice began breaking up with tremendous thunder and crashing of huge frozen cliffs collapsing into the sea; happily, the Hope was some hundreds of yards away from the fracas and, provided she didn’t drift any closer, was thought safe.

Suddenly some of the crew gave a shout and pointed in alarm and terror. Some of the Hope crew cried out in fear, “The Flying Dutchman!” but Captain Brighton reassured them; then he called for a boat to pull him across; he clambered aboard that ship and went below to see what he might find.

When he opened the master’s cabin door he was confronted with a man sitting at his desk with a pen in hand and seemingly about to write in the logbook in front of him; it was clearly the captain of the stricken ship.

Brighton immediately spoke to him, but the fellow remained perfectly silent, being in fact dead and frozen solid to boot. Captain Brighton then checked the log on the desk. The ship was the English schooner Jenny, last port of call Lima, Peru, and the final entry read, “No food for 71 days. I am the only one left alive.” It was dated May 4, 1823.

For some thirty-seven years the Jenny had remained hard and fast, crushed and imprisoned within the unrelenting walls of the ice barrier of the Antarctic.

In another cabin was found the body of a woman, no doubt the captain’s wife; like all the rest, she was perfectly preserved by the fierce cold of that terrible region.

The crew of the Hope gave the nine bodies a proper sea burial, and when he returned to England some months later Captain Brighton passed on to the admiralty the logbook and the unusual story of the ice-bound Jenny.

The Jenny was a British schooner that had nine people aboard, including one woman, and a dog. The original report has been deemed “unsubstantiated”, but the story has become a fixture of Antarctic sea-lore, and inspired a noted Australian poem.

The Jenny is commemorated by the Jenny Buttress, a feature on King George Island near Melville Peak, named by the UK Antarctic Place-Names Committee in 1960.

Australian poet Rosemary Dobson wrote about the story in her poem “The Ship of Ice” published in her book The Ship of Ice with other poems in 1948, which won the Sydney Morning Herald award for poetry that year. Dobson’s poem places the discovery of the Jenny in 1860.