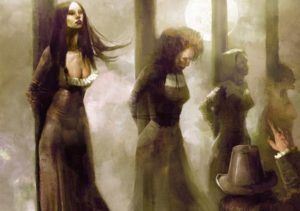 Pierre de Rousteguy, Sire de Lancre, was one of, if not the most vicious and ruthless of France’s witch hunting magistrates. He boasted that he was personally responsible for the burning of over 600 so called witches. Of all his cases, none was more bizarre than the outbreak of human barking and howling in the town of Amou, in south-western France in 1613.

“It is a monstrous thing” he said “to be in church where more than forty persons are simultaneously barking like dogs, making such a concert in the house of God that others can’t even pray.” The fact that the local people even had a name for this strange affliction – mal de Layra – is evidence that this had not been the first outbreak. But never in history had it afflicted an entire community, no less than 120 women were under it’s influence at the same time.

It never occurred to de Lancre that there might well have been a perfectly, more or less, natural explanation such as mass hysteria. For him, this could only possibly be the work of witches and the devil, and he set about combating it with ferocity. One cannot really be shocked at his approach to this case, bragging about burning people alive, one can only imagine he took a certain sick glee in his work.

One of those affected, so the story goes, was a well to-do-lady, married to a Captain of the army, who claimed she had suffered from mal de Layra for two years, ever since two witches had cursed her womb. Brought before de Lancre, she was looking at paintings in his room when his officers brought the accused witches into the building. Even before she saw them she ” began to cry and bark hideously.”

Realizing that the barking became most vigorous when the witches were close to their victims, he began a campaign that I suppose gives credence to his boasts of burning 600 at the stake. De Lancre sent his officers out to patrol the streets and to listen for the sounds of woman barking. Since a woman would only bark when a witch was near, they were to arrest everybody in sight, unfortunate bystanders who happened to be in the wrong place at the wrong time.

But did the women of Amou really believe they had been turned into dogs? And if not, what could possibly explain this bizarre behavior? However, it should be noted, the mal de Layra was not without it’s forerunners. 50 years earlier in 1551, at the convent of Sainte Brigitte in Flanders, the nuns there experienced an outbreak where they would bleat like sheep.

This went on for over 10 years. The next year at the convent of Kintorp, near Strasbourg, nuns began mewing like kittens. In both of these cases it was believed as well that the women were bewitched, and at least one of those accused was burned to death tied to the stake.