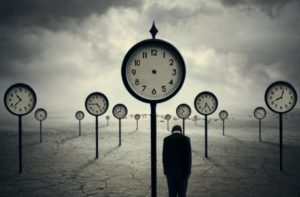 A strange experience in 2006 may have ended a life of petty crime and left 19 yo Sean Davies puzzled for life. Davies had shoplifted a few items from a store on Hanover St. in Liverpool, England. His activity did not go unnoticed and as he left, store security pursued. Davies raced down Hanover St. then turned and ran onto Brooks Alley, a dead-end.

Davies quickly realized his mistake and with no way out, waited for the security guards to arrive. It was then that he noticed pressure on his chest, not from the inside but from outside. Strange he thought, but nothing to worry about. Seconds passed, then minutes and no guards. Davies slowly walked back to Hanover St. but when he got there everything was different.

The familiar surroundings were gone. The cars on the streets were old, there were no traffic lights where just minutes earlier there were. The people on the street were dressed in clothes Davies had only seen in pictures from the 1960s.

Time was passing and whatever was happening to him wasn’t stopping. He began to panic when he tried to use his cell phone and it didn’t work. Then he saw a news stand, he quickly approached and saw the newspapers were dated May 18th, 1967.

Davies walked various streets in the area and began to think that he was stuck some 40 years in the past. It was then, in front of H. Samuel jewelry store that he tried his cell phone again. The phone worked and he suddenly found himself back in 2006. strangely however, as he looked back down the street where he had just been, he could still see the scene from 1967. Eventually it faded and everything was back to normal.

Following his strange adventure, Sean Davies told his story to many and he was eventually interviewed by a local newspaper. The paper was able to check Davies story and found that everything he described was just as the area was in 1967. The paper also found the security guard who had chased Davies down Hanover St. The Guard said he was just a few yards behind Davies when he ran onto Brooks Alley and vanished.