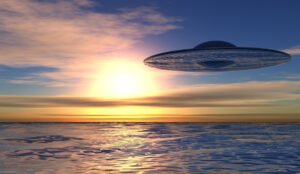 A number of UFOs have been noted hovering over bodies of water and apparently lowering a tube down to the water and “sucking it up.” These so-called “thirsty UFOs” may be using water to power their craft, may simply need to replenish the on-board water supply much as a commercial jetliner, or, it has been speculated, may be taking water to UFO bases on the Moon.

On July 25, 1952 in Vico, Italy, a man who was fishing in the Serchio River saw a disk hovering for 10 min. From it hung a hose that plunged into the water. The object was 20 m in diameter, with five propellers in the rear and a dome with something like blades on top. An orange glow could be seen through slits along the deck.

A man wearing a diving helmet looked at the witness through a window, and he received a kind of electric shock as a “green ray” hit him. He looked up with difficulty, in time to see the object fly away toward the east. Six days later, a stranger with a foreign accent contacted the witness and intimidated him.

In 1960, another sighting occurred in Syracuse New York when an electronics engineer was fishing, suddenly he heard a shrill, whirring sound and saw a round object, with a rotating light on top, land on the shore.

The sound gradually stopped, an opening became visible, and two dwarfs with oversized heads came out with a hose and pumped water from the river. Their bodies glowed with lights of changing colors.

On the sunny July morning in 1965, John Hembling, geologist and exploration manager for a mining company, and a companion geologist stepped from a helicopter atop a mountain ridge in north-central British Columbia they expected it would be another routine day of reconnaissance and survey.

But on this particular day they were to have the unexpected opportunity of making a study of a much different sort.

“It was about 10 o’clock and we had just set up our equipment after the helicopter left,” said Hembling, “when we saw a silvery object, shining in the sun, appear over a small ridge below us. It had a flattened-out look and our first reaction was that it was some kind of delta-wing aircraft. We soon realized it was not.”

Facing west away from the sun, with the object below them about half a mile away, they had a clear view of what was happening.

“The object was about 50 ft. in diameter,” he said. “On top of its dome there was a little knob, and around the base of the dome there were circular markings. They might have been some kind of riveting, or even windows. They were a bit too small to tell.

“Below these, on the face of the disc itself, there were larger rectangular markings which could have been glass or metallic. Our impression was that they were windows. As far as we could see, there were three of them.”

As the two men watched in astonishment, the object moved slowly across the ridge until it was above a small glacial lake, barely more than a pond. Hovering there an instant, it then descended to less than 50ft. above the water.

Again it hovered and, to the men’s further amazement, lowered a pipe-like instrument from its underside into the water. “At first we thought it was something like a rope-ladder,” Hembling said, “but it didn’t just drop down. It came out smoothly and steadily as if under mechanical control.”

During this procedure the observers were conscious of a humming sound from the object “like a quiet electric motor.” With its appendage in the lake, the disc then rotated slowly like a water-borne top until its “windows” faced the two men.

After remaining in that position for about eight minutes—as the men judged it–the object withdrew its “pipe” as carefully as it had lowered it.

“It climbed slowly, then all of a sudden it was off,” Hembling said. “It shot over the ridge, made a sharp turn without skidding and was out of sight in about 20 seconds. We figured it had gone 20 or 25 miles by the time it disappeared.” That would give it a speed of at least 3,600 m.p.h.

In 1969, Voronov, Russia, Heinrich Ivanovich was driving his motorcycle along the Kama River near a wooded area. On the side of the road he noticed a man who suddenly raised his hand as if saluting.

Ivanovich slowed his motorbike and approached the stranger. As he approached he noticed a strange disc-shaped object on the ground close to the stranger. The stranger wore a grayish-metallic overall with thick-soled boots.

The man did not wear a hat and had a short haircut. On his left hand he held a hose-like implement, which was apparently extracting water from the Kama River.

He approached the stranger and both conversed in the Russian language mostly about the propulsion of the object. They also spoke about space constellations. At the end of the encounter the stranger asked Ivanovich to stay back from the object and to just observe it take off. The object had a semi-transparent green colored globular dome on top.

As the stranger approached the object a door appeared on the dome and he entered it, then shut the door. The external disc immediately began to revolve and its outer rim became invisible. The object then rose into the sky and instantly disappeared into thin air.

On May 22, 1973, Japanese student Masaaki Kudou had taken a summer job as a security guard at Tomakomai, on the island of Hokkaido (Japan), at a timber yard near the sea. After a routine patrol around the site that clear, starry night he parked his patrol car, turned off its lights and looked over the lumberyard and the bay beyond.

What seemed at first to be a shooting star coming down toward the bay, suddenly stopped in its tracks, vanished, reappeared, and began to gyrate slowly down over the bay. It stopped about 70 feet (21m) above the water and then lowered a transparent tube toward the water with a soft sound (described as “min-min-min”).

When the tube reached the water, it began to glow. The tube was withdrawn, and the UFO moved to hover over Kudou’s car. Everything around the car was lit up like day. Kudou was afraid the UFO would attack or even kill him.

Leaning over to watch through his windshield, Kudou saw that the UFO was perfectly smooth and glowing white, with windows around it. He could see the shape of humanoid figures through the windows. More brightly lit UFOs and a large, brown cylinder now joined the first.

The spheres maneuvered and vanished into the cylinder, which then sped north. Kudou, who felt as if he had been bound hand and foot, regained his senses. His car radio was making static and he had a severe headache. The entire event lasted about 12 minutes.

On that night, George Blackwell, a station hand and caretaker, awoke about 1 A.M. to the sound of the farm’s cattle going wild. He could hear a “strange screeching whistling” as well, and got up to investigate. The moon was out on that night and there was no wind at all.

Blackwell saw a domed object about 15 feet tall and 25 feet broad with white top and blue and orange lights. For a while it hovered over a water tank made of concrete about 450 yards from the house. It then came to rest on the ground 20 yards further on.

Blackwell drove a motorcycle to within 50 feet of the craft. There was no effect on his motorcycle, but the whistling from the UFO suddenly rose to deafening heights, and suddenly there was a loud bang and the craft lifted off. At the same time, a blast of hot air nearly knocked Blackwell over.

The UFO dropped some debris as it flew away eastward at the low altitude of only about 100 feet. Blackwell examined the site early the next day and found a ring of blackened grass, flattened in a counter-clockwise direction. Inside the ring was green grass, but the flowers had disappeared. In a line to the east was a trail of debris which comprised some small rocks, weeds and cow dung.

For days afterward Blackwell suffered headaches and nausea, and his watch refused to work normally. Most importantly, Blackwell had discovered the water tank that the UFO had been hovering over had been completely emptied of the 10,000 gallons of water that it had originally held!

In the last 30 years, new sightings have occurred and new information on old sightings has come forth through the Freedom of Information Acts in the U.S., Britain and Australia. “Experts,” as usual, were baffled, especially that high-tech “aliens” would need to slurp up sea water in a Japanese bay. Why do aliens, or their craft, need something so plentiful as water? Could their craft actually be powered by water?

Source: Atlantis Rising Magazine vol. 55: “Underwater Bases and Alien Civiliation-Is the Answer to the UFO Enigma to Be Found Deep Beneath the Sea? by David H. Childress”