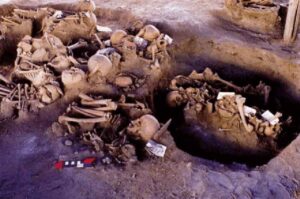 The terrible legend of the atrocities that the conquistadors committed in Mexico on the orders of Hernan Cortez found archaeological confirmation – scientists discovered the remains of women and children from a city allied with the Aztecs, who were killed by the conquistadors, who thus decided to avenge the murder of their comrades.

The report on the archaeological discovery was published on the website of the National Institute of Anthropology and History of Mexico (INAH).

Scientists carried out excavations on the site of the ancient city of Zultepec-Tekoak – here lived the Acolua people, allies of the Aztec empire.

In 1521, Hernán Cortes ordered the military leader Gonzalo de Sandoval to kill all the inhabitants of Zultepec – so the conquistadors decided to take revenge on the Indians who attacked the Spanish convoy. This was an attack, as a result of which the Indians captured more than a hundred Europeans, and then brutally killed them.

The inhabitants of Zultepec knew that revenge awaited them, so the defense was built in a hurry. But this did not help – the detachment of Gonzalo de Sandoval entered the city without any problems and staged a massacre – mainly against women and children.

“Akolua’s warriors fled the city, but the women and children remained. The conquistadors did not spare anyone – we found dozens of mutilated skeletons, burnt temples and destroyed statues of the gods,” Mexican archaeologists note.

Scientists add that the legend of the atrocities of the conquistadors in Zultepec was confirmed.