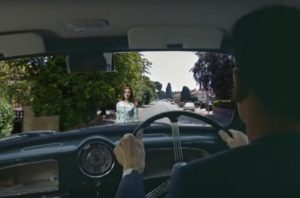 In this latest story, world-famous psychic researcher Tom Slemen talks about the Terrifying Case of the Phantom Attacker…

Because of the controversial nature of this story I have changed a few names to preserve confidentiality, but the rest is exactly as it was reported to me.

Godfrey handed over £100 in crisp pound notes to Monty and got behind the wheel of the 1960 Ford Consul and drove off.

It was a roomy, comfortable four-door forest-green-coloured car with great luggage space and a top speed of 80mph. Well worth the hundred quid he’d paid to Monty, Godfrey thought.

He’d seen the car advertised in the post office window and needed a set of wheels because he’d started dating a girl over in West Kirby.

Godfrey had only passed his test six months ago but he was a confident driver and he swung the Consul around St James’ Church and cruised up Sumner Road.

He switched on the car radio and upon hearing Lady Madonna by The Beatles on Radio 1’s Parade of the Pops show, Godfrey turned the volume up.

As he crossed Bidston Avenue into Alderley Avenue, Godfrey suspected he was being followed by a police car.

He wasn’t speeding so he thought he might just be a little paranoiac, but upon reaching Park Road West he saw the headlights of the car flash him, so he pulled over by the park and wound down his window.

“Your tax disc is out of date,” a vaguely familiar policeman told him.

He recognised his old best friend from secondary school. The two men chatted about their careers – Terry in the police and Godfrey working as a joiner, and then Terry said, “Get that tax disc sorted out, mate,” and went back to his car.

Godfrey drove about fifty yards when a pretty young redhead walked out in front of him and flagged him down. At this point PC Spooner drove past and beeped his horn as he looked at this girl.

Godfrey wound down the nearside window and the girl asked, “Could you please give me a lift to Chester?”

“Chester?” laughed Godfrey, “I’m only going as far as Claughton.”

The girl nodded, and she got into the car via the rear left door and sat behind Godfrey, which made him a little nervous. She wore a pale blue jacket with a daisy pattern and a matching short skirt, and she was well spoken.

A sweet-smelling scent the girl wore filled the car. “That’s a lovely perfume you’ve got on,” remarked Godfrey, “what’s it called?”

“Diorama,” said the girl, and suddenly she looked as if she was on edge.

Godfrey drove off and tried to make conversation but the girl just sat there gazing straight ahead at the windscreen with wide eyes.

She looked afraid of something – or someone. “You live in Chester?” Godfrey enquired but there was no reply.

The car negotiated the roundabout between Manor Hill and Ashville Road, and continued down Park Road West when something terrifying took place.

The Ford Consul shook, and Godfrey turned to see a huge man with a nylon stocking over his head seated behind him.

He held a flick-knife in his hand and as Godfrey looked on in shock, the armed stranger got on top of the screaming redhead.

Godfrey almost lost control of the car and sheared his tyres against the kerb as he pulled up on Park Road South. He yelled for the rapist to stop, then got out of the car and flagged down a lorry.

Godfrey told the lorry driver about the assault and the driver jumped down from his vehicle and went with him to the Ford Consul. It was empty.

“Is this your idea of a joke?” the lorry driver fumed, and headed back to his vehicle. Inside the Ford Consul, the scent of that perfume – Diorama – still hung in the air.

Godfrey had not imagined her and when he bumped into his old friend PC Spooner, the latter said he’d seen the girl standing in front of Godfrey’s car on Park Road West when he had passed him in the patrol car.

The hitch-hiker then, was not a figment of Godfrey’s imagination. I mentioned the case on the Pete Price Phone-in many years ago and was told by listeners that the girl had been assaulted one afternoon in April 1967 inside of a Ford Consul.

She’d left home after an argument with her father and had tried to thumb a lift to her aunt’s home in Chester. The girl’s father blamed her for the assault, saying she had dressed too provocatively.

The girl became depressed and died after taking an overdose of sleeping pills.

The rapist is said to have died in a road crash months after the assault – and his car, a Ford Consul, was sold – to Godfrey Davis.

The driver of the car during the assault is also said to have hanged himself after discovering he had a terminal illness.