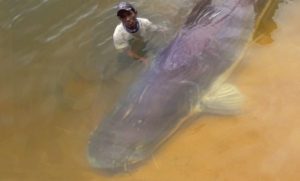 The Amazon river holds many dark secrets and tales of man-eating creatures that have been told from generation to generation. Tales of giant snakes piranha, and cayman. There are also stories of man-eating fish that swim under the murky surface and spring upon boats and humans unexpectedly.

These monster fish are known as the “Feta” or “Beast.” It is also known as the Red-Tailed Catfish, that grow big enough to swallow a human whole, and have on many occasions in years past.

The record caught on rod and reel is 54 inches long, and 108 pounds. But native Amazonians agree that they have caught much bigger fish than that. Fifty pound catfish are a normal catch for those who live along the Amazon River.

Occasionally they have caught monster cats over six feet long and 200-300 pounds. The Amazon river has many twists and turns where there are a number of places for deeper dwelling fish to thrive in and go undetected forever.

Although the Amazon is widely traveled by steamboat and by game fishermen, it is still remote enough that these horror stories of man-eating lake fish never reach the outside world.

One tale of the “Fetta,” was told by one villager along the Rio Negro River, it involved a family member of hers. But before the “Fetta” was discovered and considered a danger to the villagers, the villagers allowed their children to swim in these parts of the river among the fish.

But not long after, children began to disappear. It was discovered that these children were attacked by the monster fish and carried away. Senasira Velena tells the story of her cousin who was attacked and killed by one of these monster fish.

In 1975, while the rivers were low and the fish swam near the surface of the waters, fishermen along the Rio Negro River gathered in boats and headed out to the lagoon to go fishing, it was said to be an exceptionally good time for fishing.

Senasira’s cousin, then five years old, and a friend, jumped in their small boat and followed the village men out into the lagoon. While paddling out into the river, the boys spotted something large moving alongside the canoe. A moment later, something smashed into the boat violently, rocking it back and forth. The boys were frightened and had every reason to be.

A moment later, a giant fish jumped out of the water and capsized the boat. The boys landed in the river and for the next few minutes, a struggle ensued in the water. Screaming and splashing, the boys tried to escape as the giant fish concentrated its attack on Senasira’s cousin.

By now, the cries of the terrified boys could be heard by the men. They turned their boats around and headed back to help them. The men jumped into the water in search of the boy, but by the time they reached the capsized boat, he had disappeared.

The other boy, badly shaken, told how he had just witnessed his friend being swallowed whole by the fish and carried away under the water.

The terrified villagers went in search of the fish and the child in the river but came up empty-handed. Search efforts produced nothing. Finally, one week later, the giant Red-tailed Catfish was found lying on the shore.

As villagers drew closer to the mammoth fish, they noticed something very odd. There were two small feet sticking out of its mouth. It seemed the fish had choked on the 60 pound boy it had ingested and died. The fish was said to be bigger than a man, or at least close to seven feet long.

Amazon monster catfish have no scales and are covered in bony plates or smooth. They have two to four pairs of barbles for detecting food. Some species are known to be poisonous. These fish are known to be quite aggressive and indiscriminate feeders.

They are usually bottom dwellers, but also feed on the surface. They often dine on surface crayfish, mussels, minnow, ducks, or anything that comes into its range, which puts humans at risk.