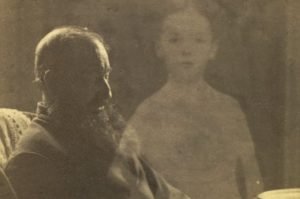 Some people have no grasp of human nature, particularly the nature of the opposite sex. General Jonathan Moulton of New Hampshire is a fine example. In 1774 he lost Abigail, his wife of twenty years, after a brief illness.

Devastated at the death of his devoted companion, General Moulton joined George Washington’s troops in their fight against the British.

He might have been content to remain the heartbroken widower if not for the lovely young sister of a friend. Once Moulton’s eyes fell upon Sarah Allen, Abigail was not only gone, but forgotten as well.

Theirs was a whirlwind courtship. And after a hasty wedding the happy couple returned to the home General Moulton had once shared with Abigail. They couldn’t have been happier.

But like most women, Sarah wanted to decorate her house to suit her. This of course meant that many of the first wife’s things would have to be disposed of.

As his new wife proceeded to either give away, or throw away his first wife’s furnishings, and fine crystal, General Moulton never said a word. As far as he was concerned, the house was now Sarah’s to do with as she chose. He may have been a brilliant strategist, but he knew nothing about women. This fact was demonstrated by the following;

After a particularly satisfying meal of mutton and mint, General Moulton sipped his wine and smiled at his wife. Beautiful beyond imagination, she deserved everything he could give her, and more.

“Dear, I’ve been thinking.” He said. “When Abigail died, God rest her soul, she left a jewel box filled with things.”

He had Sarah’s attention now.

“What sort of things?” She asked coyly.

“The sort of trinkets that you ladies generally covet. There are some diamond rings, an emerald brooch, a locket of gold, the pearl bracelet, the ruby choker, and a few gold ear ornaments.” The way he ticked the list items off she knew that he had recently taken inventory.

Greed had gotten the better of her. “And what exactly did you intend to do with the jewelry?” She demanded.

Sarah favored him with a smile. If there were jewels, she wanted them. And now, he had said the words she wanted to hear.

While Abigail slept in her lonely cold grave, her husband gave all her jewels away to his new wife. First the house and now the jewels. It was more than a woman could stand.

The joy Sarah felt at wearing all her new jewels was short lived. Two nights after she’d foraged through the dead woman’s jewel box, a terrible storm roared across the night skies. “It is not a fit night for man or beast”, the housemaid said as he pulled the warming pan from the Moulton’s bed.

But she was wrong. The ghostly Abigail chose just that night to make an appearance before the startled couple as they drifted off to sleep.

“What’s mine is mine. I demand that you give me my jewels!” The specter screeched as she reached to pull a necklace from the startled Sarah’s neck.

“Do something!” Sarah urged her husband who stared unbelievingly. . General Moulton sat erect. “Now now, dear Abigail. I had no idea that you would behave so. You were always such a kindhearted and generous woman.”

“I want my jewels!” The ghostly Abigail demanded, glaring at Sarah who cowered in the corner.

The General was no fool. He knew a hard bargain when he saw one.

“It is late and it is cold. However, tomorrow we will see that all of your jewels are buried beside you.”

Abigail smiled broadly and vanished. The next morning as the sun shone brightly in the graveyard, General and Mrs. Moulton eagerly buried his first wife’s jewels.

Abigail was content. The second wife may have gotten her husband and her house, but she didn’t get her jewels.