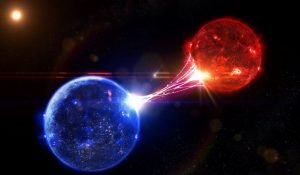 The star Nemesis orbits at a great distance from us, but its influence will be noticeable every 26 million years, when mass extinctions occur on Earth.

Scientists at the University of California at Berkeley and the Harvard-Smithsonian Astrophysical Observatory have concluded that all stars similar to the Sun are probably born with a partner. Despite the fact that this is still an unconfirmed theory, there is still indirect evidence that our Sun had and still has an “evil twin”.

The researchers have developed a mathematical model that shows that the arrangement of stars in the constellation Perseus can only be explained by the fact that they were all born with a partner.

Named after the Greek goddess of vengeance, the star Nemesis may be a satellite of the Sun, but precisely because of its small size (about 50 times smaller than our star) and low brightness, it is difficult to find, which makes it even more elusive.

Proponents of this hypothesis argue that every 26 million years, the Earth will suffer from a catastrophic extinction, as happened with the dinosaurs about 65 million years ago.

Every 26 million years, the orbit of Nemesis passes through the Oort clouds, where there is a monstrous mass of comets and other space debris. The star carries with it a part of this “wealth” and directs it towards the Earth, where a deadly rain of comets and asteroids lasts for several decades.

Scientists believe that Nemesis will provoke mass extinctions on Earth up to about 12 times, including the death of dinosaurs.

Unfortunately, with advanced technology and powerful telescopes, Nemesis has not yet been discovered. This faint object is not easily tracked among millions of other celestial bodies.

Some researchers believe that it is possible to try to detect a mysterious star in the infrared spectrum, if, of course, it actually exists.

According to this theory, Nemesis can rotate in an orbit of 1.5 light years, while being in gravitational engagement with the Sun.