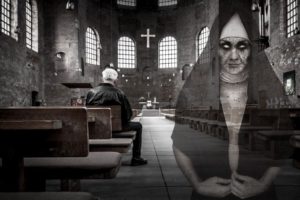 The religious Order of Mercy was founded in Ireland on the banks of the Liffey in 1831, and the nuns of this Order – the Sisters of Mercy – were soon doing their good work in other parts of the world.

One of their convents was built in England in Victorian times in the city of Liverpool on Mount Vernon Street, situated between the Paddington, Low Hill and Kensington areas. By the 1960s, the Convent of Mercy had closed, but the building had quite a supernatural reputation.

In the early 1960s, two youths from Hall Lane in Low Hill decided to burgle a house on Mount Vernon Street, facing the derelict Convent of Mercy. The house in question was inhabited by an old spinster named Mrs Smith, and local gossip had it that the elderly woman had her life savings hidden at the house.

Mrs Smith was regarded by the people in her neighborhood as something of an eccentric because she had pictures of the Scared Heart and the Virgin Mary proudly on display in most of her windows. Her parlour, said some of the more secularly minded neighbours, was like the Vatican, with crucifixes on the walls and statues of the Saints and Jesus cluttered about.

One foggy December evening at around 9 o’clock, the two youths, 17-year-old Raffy (short for Raphael) and 19-year-old Teddy, watched the spinster’s house from across the road. Behind them in the fog stood the 12-foot-high wall of the old convent.

A dim lightbulb suddenly glimmered in the upstairs bedroom of Mrs Smith’s house, and after about five minutes, that light went out. Raffy crossed the road and went down an alleyway that provided access to the backyard door of the spinster’s house.

The door was bolted, so Raffy climbed the wall and got into the backyard. He then used nothing more sophisticated than a thin wooden stick from an ice-lolly to insert into a gap in the window frame to knock off the catch.

As this was going on, Raffy’s accomplice, Teddy, saw a middle aged man on a push-bike approach from the direction of nearby Minshull Street. Teddy put a cigarette in his mouth and cupped his hand around it to partly shield his face.

He noticed that when the cyclist passed, the man didn’t even look at him, but instead, the bicyclist’s face had an expression of alarm as he looked up above Teddy at something behind him. Teddy watched the red light of the bicycle fade into the cold fog.

All of a sudden, the front door of Mrs Smith’s house opened across the road. Raffy stood there, silently beckoning Teddy. As Teddy was about to enter the Spinster’s house, Raffy pointed towards the high wall of the former convent across the road and said, ‘Who’s that?’

At the top of this twelve-foot-high wall was the head of a figure. It bobbed up and down a few times. The two burglars stood nervously in the hallway of the house, wondering who the witness was. 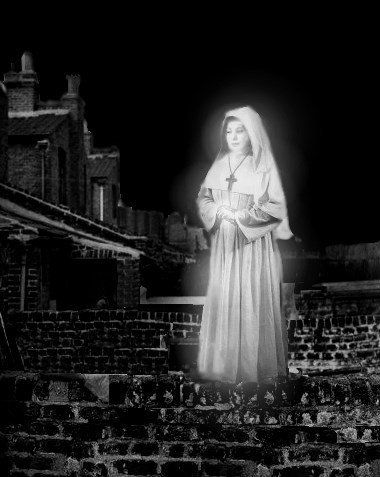 Then they saw the person emerge as far as the waist over the wall. It was a nun dressed in a pale white habit. The two youths obviously surmised that the woman was standing on some platform behind that high wall – until they suddenly saw the nun rise up over the wall until she was suspended in mid-air.

She started to fly through the air across the road towards Raffy and Teddy, and as you can imagine, the eerie sight of the nun zooming towards the criminals sent them rushing into the house.

The front door was slammed on the flying nun, and the robbers rushed to the back of the house, intending to make an escape down the back alleyway – but when they hurried out into the backyard, they saw the nun in white standing on the backyard wall.

Her face seemed as white as her habit, and her eyes were black and lifeless. At this point, someone let out a scream in the neighbouring yard, as if they too had seen the ghostly nun standing on the wall.

The youths turned on their heels and ran back through the house and left via the front door. They ran screaming down Mount Vernon Street with the nun hovering closely behind them. When they reached their homes in Hall Lane, they saw that the apparition had vanished, and they never went anywhere near the old convent again.

Mrs. Smith, the old spinster the youths had been trying to rob, is thought to have been a nun in her younger years, but no one is sure. The identity of the flying nun of Mount Vernon Street remains a mystery, but the local people saw her on many occasions.