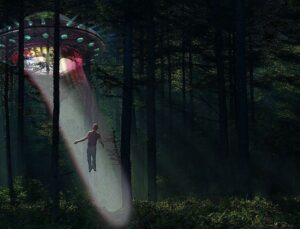 According to forgetomori.com, around the middle of his way, he decided to lit a cigarette. That was his mistake, as that apparently caught the attention of an overhead flying saucer that started to follow him very closely. He was terrorized.

“Januncio” described the object as cylindrical, around 6-7 meters in height and 3-4 meters in diameter. It was extremely close to him, only a couple of meters over his head, and he described seeing two people inside, a man and a woman, seated. “The woman looked like she was wearing a dress”.

The object emitted a light that somehow sucked Januncio. To avoid being captured by the light, he grabbed a palm tree as best as he could — in the photo above, Januncio shows the bizarre situation.

“The light was very hot and I was scared”, he said. The suction from the light was very strong and despite firmly grasping the tree, Januncio was being lifted from the ground. “This happened some five times. Up and down, up and down… My chest was all scratched”. He started to cry and thought he was going to die.

“Then, when the man and woman saw that I was not leaving the tree, they threw something like boiling oil on me, to release me from the tree. I felt I was between the fire and the frying pan. I couldn’t move. The thing burned my arms and hurt me a lot, but I was afraid of leaving the tree”.

“That thing lasted less than two minutes. If it had been longer, I think I would have died, because it was very hot. As I didn’t leave the tree, they closed the door, the light turned off and the thing quickly went away, like a lightning”. Januncio ran home, his clothes wet in sweat. He was sick for two days afterwards, and very scared of walking outside at night.

The incident is described by Pratt in “UFO Danger Zone: terror and death in Brazil, where next?” (Horus House, 1996), and the image of Januncio grabbing the tree even made it to the cover. A Portuguese excerpt, from which the images above were taken, can be read on the website of researcher Reinaldo Stabolito, Painel OVNI.

We describe it here because a couple of days ago a Brazilian ufologist, Carlos Airton, made a very interesting comment about it:

“Regarding this boiling oil [story], the palm tree [Januncio] grabbed was a Carnauba palm, and in the leaves of this tree a powder is formed. This powder is used to make wax, oil. So, the heat generated by the UFO overhead melted this powder, and it dripped over the poor fellow grabbing the tree, who thought the UFO was throwing boiling oil over him, something quite unique.”

Read again the report as Januncio did indeed repeat several times how the light from UFO was hot. And he didn’t have much scarring — if any — from the incident, which suggests that if “boiling oil” was indeed what fell over him, it was only a bit.

Of course, a more prosaic explanation would suggest everything in this incident could have been imagined by Januncio. Pratt believes in the reality of the report, even when he describes that he later discovered one more report of aliens throwing “boiling oil”: the one by Benedito Henrique de Souza. Son of Januncio, who described more or less the exact same events, including the detail about the cigarette attracting the “boiling oil throwing” UFO.

Having only anecdotal evidence, it may well be impossible to ascertain what actually happened, if anything. But if something did happen, the suggestion by Carlos Airton that the “boiling oil” detail could have been only natural Carnauba palm tree oil melted by heat is very interesting.

Though not as whimsical as medieval aliens throwing boiling oil.