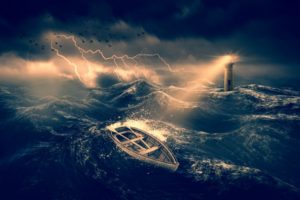 On the afternoon of February 11, 1979, 5 friends, Peter Hanchett, Benjamin Kalama, Ralph Malaiakini, Scott Moorman and Patrick Woesner set sail from Maui, Hawaii for a days fishing trip on a boat called the Sarah Joe. The day started well, and the weather was fine, but the wind picked up and a storm came in. Peter’s father, John Hanchett, grew concerned when the group failed to return, and went out into the middle of the storm to look for them, but after several hours, he returned home without finding any traces of the boat.

The next day, he was joined by marine biologist John Naughton, but yet again, they returned having found no trace of the boat or its occupants. On the third day, Captain Jim Cushman of the Coast Guard continued the search for the Sarah Joe by helicopter and ship. Five days later, the search was officially suspended, after a total of seventy-three thousand miles had been searched. No trace of the Sarah Joe or the five men was found.

The obvious conclusion was that the five men probably got lost at sea in the storm and drowned, but things took an unexpected turn on September 9, 1988 when pieces of the “Sarah Joe” were found on an island over 2000 miles away by John Naughton. An unmarked shallow grave was also found on the island where the remains of Scott Moorman were buried under a pile of rocks.

Naughton was on a wildlife expedition to a deserted atoll called Taongi approximately 2000 miles from Maui, a part of the Marshall Islands, when he discovered a small boat washed onshore. Based on looking at the boat, he could tell it was registered in Hawaii. Several feet from the boat, he found a shallow grave with a human jawbone protruding from a pile of rocks.

The Coast Guard linked the boat to the Sarah Joe and dental records proved the jawbone was part of the remains of Scott Moorman, one of the missing Sarah Joe fishermen. It is entirely possible that the boat made it to the island within three months, but the problem is that a Government survey of the island six years previously would have found the boat and remains on the island. And what had happened to the other 4 occupants, and who buried Moorman?

The family hired private investigator Steve Goodenow to look into the loss of the crew. He took a team to Taongi and discovered a “handful” of Scott Moorman’s bones near the original grave. Divers also found the boat’s engine’s wedged underwater in nearby coral.

Given the narrow channel between the reefs and islands, it is unlikely the boat could have reached the Taongi lagoon without human interference. Goodenow hypothesized that Chinese fisherman found Moorman’s body and buried him, he further theorised that fisherman did not report the incident since they had been fishing in the area illegally.

Robert Malaiakini, brother of missing crew member Ralph Malaiakini, thinks that Moorman tied himself to the boat to weather the storm and doubts that anyone from the Sarah Joe could have survived the storm and 2,200-mile journey to Taongi.

Memorial plaques to commemorate the crew were installed on the Taongi atoll and in Hana Bay.

The Suspicious Death of George Reeves: Who Killed Superman?