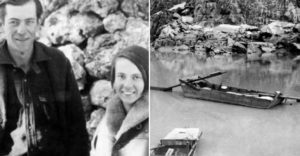 Bessie and Glen Hyde were honeymooning in northern Arizona at the Grand Canyon when they vanished in 1928. Glen wanted to set a new speed record for travelling through the Grand Canyon, while also putting Bessie in the record books as first documented woman to run the canyon.

Glen Hyde had some experience with river running, having traveled the Salmon and Snake Rivers in Idaho with “Cap” Guleke, an experienced river runner, in 1926. Bessie was more of a novice however. The couple ran across other boaters a few weeks before their disappearance who said they got the feeling that Bessie wanted to turn back, but Glen was pushing her on. It is believed that had they completed the trip successfully, that they could go on a paid lecture tour, so the trip was more than just fun, there was also a possible financial reward at the end of it as well.

They were last seen Sunday, November 18, 1928, when they boated away downriver below Hermit Rapid. The couple had hiked Bright Angel Trail out of the canyon to resupply a few days earlier. At the South Rim they had approached photographer Emery Kolb at his studio and home on the canyon rim, where they were photographed before returning down into the canyon.

A search was launched by Glen’s father Rollin on December 6 1928, even before the couple were to be considered overdue at Needles, California. On December 19, a search plane spotted their scow adrift. The Hydes’ boat was discovered that winter, seemingly undisturbed. It was upright and full of supplies, but the couple were nowhere to be seen, and were never to be heard from again.

A camera recovered from the boat by Emery and Ellsworth Kolb revealed the final photo to have been taken near river mile 165, probably on or about November 27.

There are many theories about what happened to the Hydes. Did they disembark and try a too difficult side hike?. Did they have an argument that turned violent? Or were they possibly abducted and murdered? Historian Otis R. Marston suggested that the couple were most likely swept out of the boat when their scow hit submerged rocks in the heavy rapids… However despite extensive searches, their bodies were never found.

The romance of the story, coupled with the lack of any conclusive evidence as to the fate of the Hydes, has led to a number of legends and rumours. An elderly woman on a commercial Grand Canyon rafting trip in 1971 announced to other rafters that she was Bessie Hyde, and that she had stabbed her abusive husband to death and escaped the canyon on her own. The woman later recanted this story.

There was some speculation after the death of famed rafter Georgie Clark in May 1992 that she was really Bessie Hyde, due to some documents and a pistol found in her effects after her death, but no conclusive evidence for such a link was ever found, not to mention that Clark’s early life is well documented.

Skeletal remains found on the canyon rim in 1976 with a bullet inside the skull were later proven not to be those of Glen Hyde. Suspicion had turned to photographer Emery Kolb, because the remains were discovered on his property and he was one of the last persons known to have seen the couple alive… And in addition to that he was the person who recovered their camera from the boat. However, a later forensic investigation conducted by the University of Arizona concluded that the skeleton belonged to a man no older than 22 and who had died no earlier than 1972, ruling out the possibility that it was the remains of Glen Hyde.

Glenn was 29/30 (with his birthday being on the 9th of December making it impossible to know whether his disappearance fell before or after his birthday, as they were last seen on November 27th, and the boat wasnt discovered until December 19th), and Bessie being aged 22 at the time of their disappearances.