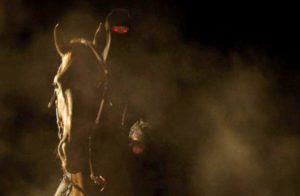 From the area around the Forest of Marr came a family named Marr, whose lives were marked for tragedy. Their trouble began after the family left Scotland to settle down in West Virginia.

Mary Marr was an autumn bride, considered to be an ill omen. In years to come, Mary would lose six of the eight children that she bore. Only two would carry on the Marr name.

Times were hard for Thomas and Mary Marr, but they did not lose their dream of a better life.

They poured their energies into a simple tract of land that became their home, and soon built a picturesque white farmhouse against the shadowy woods thick with sumac, milkweed, and blackberry brambles.

The years of the Civil War, as for most, were not happy ones for the Marr Family. From their front window Thomas and Mary witnessed small clashes between Yankee and Confederate soldiers that turned into bloody battles.

There were public hanging on nearby Fort Boreman Hill. As the war drew to a close, marauding soldiers from both sides stole freely from the Marrs, leaving them destitute.

After the Civil War, the Marr family’s bad luck appeared to come to an end.

Thomas landed a job as night watchman at the tollbridge that crossed over the Little Kanawha River leading into Marrtown. Mary stayed at home to tend the family and the farm. Still, there were ominous hints of what was about to unfold.

On several occasions, as Thomas traveled to and from his work, he saw a robed figure riding a white horse.

Thomas claimed he came upon this rider nearly every night, yet he was not able to say much about the figure, as its face was always covered by a tattered hood. 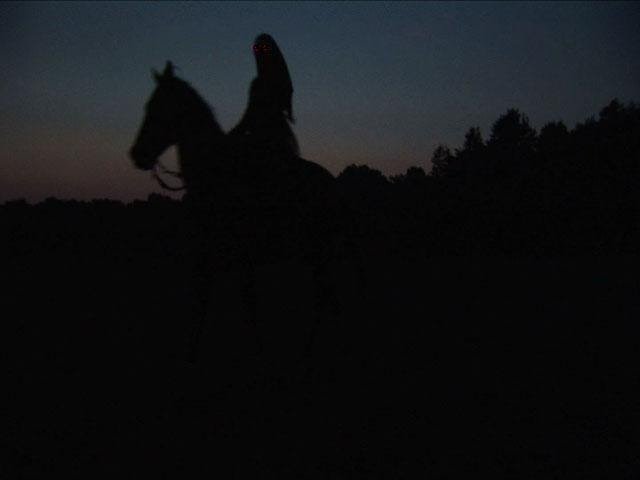 As he approached the shrouded figure, the white mare would rear, and horse and rider would disappear into the mists of morning.

On a cold February night in the year of 1878, Mary sat by the front window waiting for Thomas to come home from his job. The middle-aged woman heard footsteps coming up the road, so she peered out the window.

A white horse walked up to the front gate of the house and stopped. Sitting on the horse was a rider whose face was covered by a ragged veil. Mary walked outside into the frigid night air. The rider remained silent.

As bitter winds gusted, Mary Marr pulled her woolen shawl close. She asked the rider what she wanted. There was no answer. Plumes of icy air billowed from the nostrils’ of the white horse.

The decrepit ride sat stiffly in her saddle. Underneath the gauzy veil, Mary saw that a woman’s eyes radiated an eerie red glow. After a few moments, the woman on the horse spoke, “I am here to tell you, Mary Marr, that Thomas Marr has just died. Say your prayers, Lady. I bid you well.”

At that, the rider and horse turned abruptly and galloped away.

Mary collapsed onto the front stoop in tears. Within the hour, a man who worked with Thomas came to deliver the news.

On one knows for sure what happened to Thomas Marr that fated winter evening. Some say that while working at the toll bridge Thomas was shot by an assailant’s bullet, then fell into the Little Kanawha River and drowned.

Others claim t hat it was the cry of the banshee that startled Thomas into meeting his end in the river below. The truth is, Thomas Marr did die on February 5, 1878 the day the Marrtown Banshee visited Mary Marr.

Mary Marr lived to be ninety years old, an exception for that time. As Mary lay as a corpse in the palor of her home many years after her husband’s death, family members heard the rattling of chains in the attic. Others claimed to hear the shrieks of a woman.

A few years after Mary died, one of the Marr children cut off his hand in a tragic accident. As family members sat up with the boy, they heard snarling sounds on the porch. When the women went outside, the stoop was covered with blood as if a terrible struggle had taken place.

What has become of the banshee of Marrtown? It is said she still rides, bringing dreaded omens to those of Scottish blood. You would be wise to avoid Marrtown on dark and moonless nights.