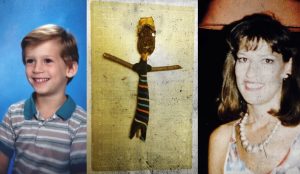 In 1994, in the state of Texas, someone called 911 but remained silent on the phone. Nevertheless, the police went to the address, but what they found inside this house terrified everyone…

The Mabel family lived in the quiet town of Selina, Texas, about an hour north of Dallas. The family consisted of Olivia Mabel, her husband Travis, and their son Aiden. It was the most ordinary and quite prosperous family without problems and without oddities in behavior.

In March 1990, seven-year-old Aiden was found dead in a local pond. It was decided that he accidentally drowned himself. His mother Olivia was shocked by grief, she left work, stopped doing any social work and even her own husband no longer interested her. Soon, Olivia and Travis divorced.

Until September 1991, she still appeared near the house, but very soon no one saw her. Neighbors complained that the unfortunate mother had lost her mind and was probably placed in a hospital or became a recluse.

On February 27, 1994, a phone call rang out from Mables’ house, which we mentioned at the very beginning. The police arrived at the house and started ringing at the door, but no one answered them. Then they smashed the door and went inside.

Inside, everything was so abandoned, as if no one had cleaned anything for several years. A thick layer of dust on all surfaces and stale air spoke for themselves.

However, when the police entered the bedroom, it turned out to be incredibly clean and all things were neatly folded. In the middle of the room, Olivia Mabel sat in a rocking chair, wearing a nightgown and slippers. In her hands she was holding a home-made doll that was roughly made from sticks.

Judging by the condition of her body, Olivia had been dead at least a month.

Before the chair was what might have been an altar. On the table, covered with a children’s blanket, lay pictures of little Aiden, his drawings, letters that Olivia wrote to her son after his death, several of his toys, candles, flowers, and an urn with the ashes of a boy.

The table was covered with notes on yellow paper in an incomprehensible language. Later it turned out that this is Sanskrit and there are written such words as “Create” and “Raise / Build”.

Everything at first was similar to what the neighbors thought – Olivia went mad with grief and spent all her days longing for her son. A 911 probably called someone from the neighbors.

But then the oddities began. Investigators found another note in the house, dated February 27, 1994, the day when there was a call to 911. At the same time, the note was clearly written by Olivia’s hand, it was her well-known uneven handwriting. But how can that be? Olivia, judging by the dried remains, died at least a month before.

In this creepy note was written the following:

“My Aiden, I’m sorry. I’m so sorry. I should have never let it get like this. I’m leaving. I will not let you keep me you ViLE, EViL CREATURE. Mommy’s coming for you, Aiden, my sweet Aiden. Mommy loves you.”

The official investigation decided that Olivia had written the letter in advance, but some of the officers later admitted that while they were in the house Mabel, they felt very uncomfortable and felt someone’s otherworldly presence. They were so convinced what they felt that they even called for an expert on paranormal phenomena.

Francesco Santiago, whose uncle was fond of occult things, was the first police officer to suggest that the altar created by Olivia was not just a memorable sign, but was used to create the so-called tulpa or thoughtforms.

Perhaps Olivia was trying to create an image of her dead son, and for this she resorted to magical practices. But what happened after that? Had the tulpa Olivia created in Aiden’s image gotten out of control, turned evil? Maybe tulpa was the one who killed Olivia? Whom did Olivia call in her note to her son a “vile and evil creature”? And who or what placed the silent 911 calls from the house that evening?

Unfortunately, nothing was said to the press about what Olivia Mabel’s autopsy revealed and what was the cause of her death.

Belgian-French explorer, spiritualist and Buddhist, Alexandra David-Néel, observed tulpa creation in 20th century Tibet and wrote in Magic and Mystery in Tibet, “Once the tulpa is endowed with enough vitality to be capable of playing the part of a real being, it tends to free itself from its maker’s control. This, say Tibetan occultists, happens nearly mechanically, just as the child, when his body is completed and able to live apart, leaves its mother’s womb.”

In 2005, the case of Mables resurfaced in the press when it turned out that no one wanted to buy their abandoned house. The landlord eventually invited a paranormal expert from Austin Drew Navarro to the house to do a “clean up”.

According to Navarro, as soon as he entered the house, he almost choked:

“I have been in hundreds of strange places, but never before have I felt such a powerful force. I could barely breathe, and my heart was pounding wildly,” he told reporters.

The energy of the house was different in different rooms, but everywhere was very negative. Navarro did not find out exactly what was wrong with this house, but he compared the evil entity, probably living in it until now, with a child who rushes into hysterics from helplessness and anger.