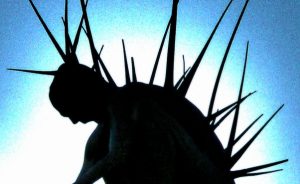 The strangest case in the long history of Nottingham’s General Hospital is perhaps that of Katherine (Kitty) Hudson. Kitty was the 9th patient to be admitted to the newly opened Hospital on the 4th August 1783. Her case caused much excitement in the medical profession and perhaps a little disbelief.

Kitty was born in the Nottingham village of Arnold in 1765, the granddaughter of Mr White, sexton of St. Mary’s Church Nottingham. At the age of 6, she was sent to live with her grandfather, where to earn her keep she was put to the task of sweeping the pews and aisles of the church. Whilst carrying out her work, every time she found a pin or needle, Kitty would put it into her mouth for safe keeping.

This, in its self is not an uncommon practise and perhaps the young Kitty had seen her mother do this whilst carrying out needle work. However, Kitty began to enjoy the sensation of sharp objects in her mouth. This habit was further encouraged by a resident servant girl in her grandfather’s employment. For amusement, this young woman would offer Kitty a ‘stick of tuffy’ in return for a mouth full of pins.

For Kitty, what began as a habit soon became an addiction and in her own word; ‘she could neither eat, drink, nor sleep, without pins or needles in her mouth.’ Such was the damage caused by this practise, that by the time her friends and family were aware, she had worn-away her double teeth almost to her gums.

Kitty began to suffer a constant numbness in her arms and legs which the doctors could not explain. When she was finally admitted to hospital Kitty’s right arm was inflamed and infected. On examination, the doctors discovered two needles under the skin a little above the wrist. These were quickly extracted using forceps. Further examination revealed more needles higher up the arm, which were also extracted.

With the exception of two or three short brakes when she was sent home, Kitty was to spend nearly two years in hospital until finally discharged as cured. Over this time the records show that she underwent numerous operations to remove; ‘Great numbers of pins, needles and pieces of carious bone were extracted from her feet, legs, arms and other parts of her body and both breasts were removed with the knife.’

As an in-patient, Kitty’s pains continued in various parts of her body and the hospital record book records that on the 11th October, ‘A very large darning needle was this day extracted from her right breast, seemingly buried within a part of that gland; thinks she feels another needle very deep seated under the gland in the middle of the breast; complained of great pain in the breast after the removal of the needle, which in about an hour afterwards became so excessive as to through her into convulsions.’

The convulsions continued intermittently until 1st Nov. when the records state; ‘The needle, (sic. in her breast) still appearing to lie very deep within the breast; and about three days ago her jaw became locked; very weak and low; pulse small and weak; made an incision quite through the breast, and extracted a large needle which adhered to the tendinous fascia covering the pectoral muscle; afterwards brought the lips of the wound together with adhesive plaisters.

Kitty was not just having pins and needles extracted from various parts of her body, but also expelled them in her urine. The records state that on 3rd Feb. She; ‘Passed a pin yesterday by urine, which was not coated or particularly corroded, (which suggests that other examples may have been) and this day with the same excretion, passed a needle. Kitty’s general condition is described as ‘faint and low.’

On the 24th Feb. Kitty’s right breast again became extremely inflamed, which continued for several days. By the 8th March, Kitty was complaining of a deep seated pain in her breast which prevented her from resting. Without doubt, the doctors suspected the pain to be caused by yet another needle and on the 19th March were planning to operate in order to remove it.

During the operation, – which took place on the 22nd, – the needle discovered, passed into Kitty’s thorax and was could not be reached. Her breast tissue was found to be so infected that part of it was removed.

The records for 26th June states; ‘For several days has complained (sic. the patient) of great pain in her breast and describes it to be as if several pins were lodged in the mamma and pectoral muscle, and lying between the two ribs.’

On the morning of the 30th Aug. Kitty was once again operated on and the whole of her right breast was removed. On examination, a needle was found in the middle of the tissue. In the evening, Kitty suffered a haemorrhage and the dressings were removed and a pin was found in the dressing.

Still complaining of pain, Kitty’s dressings were again partially removed on 4th Sep. and a pin was found sticking to them with four more pins lodged in the wound. Two more pins were found stuck to the dressing on 9th and a further two and a plum-stone – which she had swallowed two days before, – on the 11th.

Kitty Hudson’s case continued to fascinate and baffle the medical staff at Nottingham’s General Hospital throughout the remainder of 1783 and for most of 1784. Many more needles and pins were removed or spontaneously erupted from various parts of her body and her left breast also became badly infected. Kitty was finally discharged from hospital as fully ‘cured’ on the 27th of December 1784. But her story has a somewhat surprising and relatively happy ending.

By a coincidence a young man by the name of Goddard attended the Hospital as an out-patient, with what is described in the records simply as a ‘complaint in the head’, – through which he lost an eye. This young man was also from Arnold and was a childhood friend of Kitty. Later, Kitty was to comment that; “had sweethearted her from a child.” Two quickly renewed their friendship and became romantically attached. Goddard swore that he would marry Kitty even if she lost all her limbs, providing her life was spared.

They were married six months after Kitty’s discharge from hospital and lived in Arnold. Here, Kitty bore 19 children, only one of which, – a daughter, who lived until the age of 19, – survived infancy. Kitty became the ‘Nottingham Post,’ (postwomen) and for many years walked twice daily between Arnold and Nottingham. A popular figure she is described as being; ‘tall, stout and of masculine appearance.’ Carrying her large leather post bag over her shoulder, she wore a small bonnet, a man’s spencer, (a short tailless jacket) of drab cloth, a course woollen petticoat, worsted stockings, and strong shoes.

Kitty’s husband died in 1814 and a short time after, she went to stay with friends in Derbyshire where she lived out the remainder of her life.