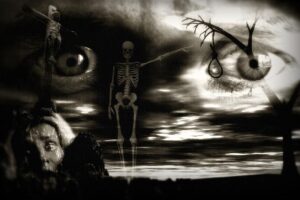 In June 1870 William Moir, bailiff responsible for a farm at Boyndie near Banff, had a strange and vivid dream in which he saw the dead body of a man with blood on its face, lying on a slight mound on some sloping ground that bounded his farm and stretched to the seashore, about 16ft from the high water mark.

Moir, described as an “intelligent, steady, and modest man, 35 years of age, and married”, was deeply affected by the dream. In July 1870 there came what initially appeared to be the fulfillment of the dream.

A man who had been an inmate of the Banffshire Lunatic Asylum, at Ladysbridge, was found drowned at a point about 200 yards from the place in Moir’s dream.

Together with some menservants, Moir had been out sea fishing and from their boat they observed the dead body. Hastening ashore, Moir was the first person to put his hand upon the corpse.

He and one of his companions proceeded to carry the body to the village of Whitehills nearby. Whilst carrying the body, they passed over the exact spot Moir had seen the dead man lying in his dream.

When about six yards beyond this, Moir’s companion slipped and dropped the board upon which the body lay, causing it to fall to the ground. Moir, keeping hold of his end of the board, observed blood upon the face of the corpse, and he looked upon the incidents as the fulfillment of his dream. However, more was to come.

The vision in the dream returned repeatedly to Moir through 1871, to the point it disturbed him so much that he could not go out walking or sit down at home in the evening without recalling it.

He was conscious of becoming taciturn, morose and absent. Finally, at the end of January 1872, he went down to a place known as Stakeness, about 400 yards from the place in his original vision and began digging with a spade. He immediately turned up a human skull, followed by the lower jaw with teeth and shoulder bones.

Further digging brought up other bones of a human body as far as the tigh. Realizing he had dug up a skeleton, Moir fetched one William Lorimer, the cattleman at the farm, to help with the digging and they brought out the lower bones of the skeleton.

Both men then deposited the bones in the cavity, and covered them up, and Moir went to the village of Whitehills to consult Mr. Taylor, a local shopkeeper.

An Inspector M’Gregor of the county police happened to call into the shop at the same time. Moir immediately told him what had happened and they hurried to where the bones lay. It being dusk, the inspector arranged the removal of the skeleton the next day and reported the matter to the Procurator Fiscal.

The place where the bones were found seemed an unlikely one for a grave, there being only a thin layer of mould and earth above the shingle; nearby were some discolored stones, suggesting it might have been the site of a kiln for burning kelp, a local industry that had been discontinued about half a century earlier.

No murder or disappearance was known locally to account for the discovery. It was suggested that Moir might have heard something in childhood, but in fact his family did not live in the district at the time. The bones were estimated to be at least 50 years old.

However, when inquiries were made about the case in 1883 by a Mr Stewart on behalf of the recently formed Society for Psychical Research, it was soon learned that the story had not ended happily.

Stewart discovered that Moir had fallen into what was described as “a state of religious depression such as seriously to unhinge his mind before his death,” which occurred in October 1873.

It seems, Moir had been a troubled man until the finding of the skeleton, and after its discovery, he divulged his belief that “his dream proceeded from an unaccountable feeling, as if he himself had somehow been witness, of or implicated in, the murderous act”.

Moir’s wife Jessie confirmed her husband’s strange reactions from the night of his dream until the day he dug up the grave. She stated that although the dreams had stopped after the bones were found, the shock to his system led to his death.

She also revealed that old people living in the village of Boyndie knew that a man named Elder had disappeared suddenly some 40 or 50 years before.

He was said to have left for America, but it was generally believed that he had been murdered in the room which Moir later slept. The dream of the dead passes into the dream of the living; it persists in Moir’s mind with the same intensity as in the murdered man’s own imagination.