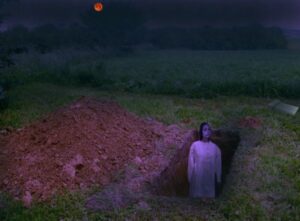 One humid moonlit August night in the early 1970s, 17-year-old Barry Strawsell, and his best friend, 18-year-old Tim Davis, left their girlfriends Debbie Atkins and Judi Swanson on Hillfoot Road and made their way to their respective homes on Mather Avenue and Stamfordham Drive via a shortcut through Allerton Cemetery.

The moon was full and Barry and Tim were full of bravado and cider and despite the eerie setting, the lads harboured no thoughts of ghosts as they strolled through the place of the dead.

‘The moon was that bright, it was almost like daytime,’ Barry recalled, ‘and me and Tim talked about our girlfriends, and Tim even mentioned proposing to his girlfriend Judi. Ghosts were the furthest things from our minds as we made our way to our homes. The time must have been just past midnight when it happened.’

Barry and Tim had covered about six-hundred yards when they both heard a woman’s voice shouting somewhere. She sounded distressed but the teens couldn’t make out what she was saying.

‘She might be getting attacked,’ said Barry, ‘let’s go and help her.’ The boys trotted north to the sound of the possible damsel in distress, and it took a while to find the woman because her yells were echoing off the gravestones and it was Tim who worked out where the sound was coming from.

He pointed to the North East of the cemetery and said he could see something moving. The lads walked to the place indicated by Tim’s pointed finger, and they came upon a scene that was like something from an Edgar Allan Poe story.

There was an open grave, and clods of earth and mud were being thrown out of it. The toppled white marble headstone of this grave lay about fifteen feet away – as if it had been hurled there.

‘What is it?’ asked a trembling Tim, picturing a giant mole at work, but then a woman in a white gown – or perhaps a burial shroud – with dark stringy shoulder-length hair and a very pallid face – came floating up out of the grave. She shouted to the terrified onlookers, ‘I’m not sharing a grave with that cow!’

Barry and Tim ran out of that cemetery as fast as their legs could carry them, and at one point Tim tripped and went flying. Barry helped him up and reassured his friend that whatever that woman was, she was not following them, but all the same the boys got out of Allerton Cemetery pretty sharpish.

The parents of the boys didn’t believe their macabre tale, but the next day, the Liverpool Echo reported that vandals had desecrated a grave at Allerton Cemetery and had excavated so much of the soil on the grave, the coffin was exposed.

The white marble headstone of the grave had also been wrenched up and thrown some distance away.

The article in the newspaper prompted many readers to get in touch to say how no vandals had been responsible; it had been one of the two women buried in that grave, and the husband of those two late wives later got in touch with the newspaper and confirmed this.

The man, named Roy, had married his first wife in the 1960s and she had tragically died a few years later from a short illness. His second wife, an orphan who had no family, later died in a traffic accident, and she had known the man’s first wife and did not get on with her.

All the same, the husband buried his second wife in the same grave where his first wife was resting and he had plans to be buried with his two wives one day – unless he met someone – as there was only room for one more.

Then Roy started to find the grave disturbed, and the headstone would be toppled, and in the end, the gravediggers found all of the earth excavated from the grave, and many of the people visiting the graves of loved ones also witnessed the self-excavating grave.

The husband ended up having his ‘troublesome’ wife exhumed – and cremated. He then scattered her ashes in the Mersey and threw the urn in the river as well.