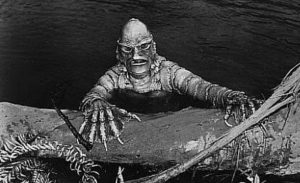 On August 22, 1972, The Victoria Daily Times reported on a story of an encounter between two local teens, and what has become known as, The Thetis Lake Monster.

According to the Times, Robin Flewellyn and Gordon Pike, ages 16 and 17, were standing on the beach at Thetis Lake, near Victoria, B.C. when they saw a large swell in the water. Within seconds, the boys were fleeing in terror, pursued by a Monster.

The two boys ran as fast as the could to their car that was parked nearby. Just as they got to the car, with the Monster right behind them, the Monster lunged, slicing open the hand of one of the teens.

The Two managed to reach safety in the car, and sped off, leaving the Thetis Lake Monster Behind. The incident was reported to the RCMP. After speaking with the boys, the RCMP started an investigation, feeling that Flewellyn and Pike were being sincere.

The teens described what they saw to RCMP. About 5 feet tall, 120 lbs, covered with silver scales and had a mouth like a fish.

With webbed, clawed hands and feet, it sounded like “Gil Man”, from the movie, “The Creature From The Black Lagoon”, except the boys said the monster had razor-sharp fins on its arms, legs and running down the middle of its head.

The investigation ended quickly as no other witnesses, or any physical evidence was found.

Four days after the story was reported, two men claimed to have spotted the creature on the opposite side of the lake from its first appearance. According to one, “it came out of the water and looked around. Then it went back into the water. Then we ran!”

Just four days after the first report, on August, 23rd, 12-year-old Mike Gold and 14-year-old Russell Van Nice, were fishing on the lake when they saw the water swell. They said they saw the Monster rise up out of the lake, look around, and then submerge.

Many years later, Van Nice, then in his forties, said he and Gold made the story up after hearing about the first report.

So, with the admission of a hoax, we are left with just the original two witnesses. The two stand by their story, and have never changed it in the many re-tellings since the encounter.

There is also the legends of the Native Americans, that tell of a part reptile, part human creature that lived in the lake. The native Americans made every effort to avoid the Thetis Lake Monster, as past encounters had resulted in attacks, and death to the Natives.

Similar creatures have been reported from places such as Ohio, Delaware, Louisiana, and North Carolina, for at least the last century. Lake monsters like this one, are said to exist all over the world.

Sightings of Lake Worth Monster: A Mysterious Creature Was Photographed