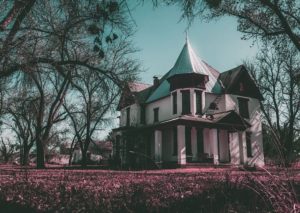 In the town of Mount Holly along the bank of the Catawba River in Gaston County there is a house with a dark secret. Every year, on the same day, a ghost come back from the beyond to walk the house and terrify those who live there. No one knows who it is, or why it’s there. But everyone knows when it will come back…

The house, for our purposes, will be the Taylor house although that name is not the correct one. It was built in the early to mid 1800’s and has been the site of a ghostly presence since 1886.

As the story goes, the owners of the house, George and Mathilda arrived home late on October 25, 1886 after a visit to her mothers. George dropped his wife off at the house and then started to make his way to the barn to put up the horse and buggy.

He didn’t get too far when he heard a horrid scream coming from the house. He rushed inside to find Mathilda unconscious in the foyer just below the stairs to the upper floor. The room was bathed in an eerie blue light. George thought she had fainted. But from what?

He looked up to see the reason. At the top of the stairs was a ghastly apparition. Giving of blue light was what looked to George to be a soldier in a union army uniform. It had no eyes, only sunken holes and it’s left arm was only a stump from which dripped blood that was dark blue in color.

George was frozen in fear, as most of us would be. Frozen, that is, until the being raised it’s right arm and lunged at him. George, with what I imagine would be adrenaline-fueled burst of superhuman strength and speed, picked his wife up and hurried out of the house to the barn where once Mathilda regained her senses they spent the night watching the blue light move about the house through the windows.

The next day they decided to stay with Mathilda’s parents for a while. After a few weeks George grew tired of the long journey back and forth to care for his farm and so cautiously returned to spend a few nights in the house. Given the all clear a week or so later, Mathilda joined her husband in their home.

All was well it seemed in the house until October 25 of the next year. George was awakened at 11pm to the sound of someone walking along the hallway outside his bedroom door. Looking towards the door, George saw the blue light coming in from under the closed and locked door. He then heard the ghost walking down the steps to the first floor and for more than an hour, George heard the spirit, ransacking the house, opening cabinets and drawers.

All the commotion awoke his wife who at first thought it was a burglar had invaded them. It was when she looked at her husbands face she knew what was downstairs. Unable to help her self, Mathilda let loose with a blood-curdling scream. If the sound affected the ghost, it made no indication of it.

So the couple listened to the ghost search for… something all through the night. Never moving, just huddled together in their bed they prayed for dawn. At day break, they ventured out of their room and into the house but found nothing out of place. In his last entry in his meticulous journal, George wrote: “Something evil has driven us from our home”. The journal entry was October 26, 1887.

After the Taylor family moved out, the home stayed empty for almost 7 years. After all, who wants to live in a haunted house. It was then purchased and occupied by the Anson family from Tennessee.

The family stayed in the home for nearly 20 years and during that time, no one ever spoke of the ghost with the blue blood. However, one thing seems odd. When the patriarch of the family, Will Anson, died of a heart attack the rest of the family packed up their belongings and headed back to Tennessee.

They didn’t bother to return even for Will’s funeral. The official cause of death was a heart attack. The date of his death was October 25. Again the house stood empty for years.

The Blake family moved in next. The arrived in mid-September of 1926. On the night of October 25 of that year, Sam Blake heard what he thought was a robber. Arming himself with a shotgun, he snuck into the hall way.

Seeing the creature with no eyes and a bloody stump of an arm George Taylor had seen before him, Sam took aim with his shotgun. Before he got a chance to fire, he felt something sticky on his foot. Looking down, he saw drips of blue blood along the floor.

Dropping his weapon, Sam threw himself back into his room. He spent the night unable to sleep; listening to the ghost searching the house. The following day his wife saw the drops of blue blood on the floor and cleaned them. The next day, they reappeared. Time after time, she cleaned the blood from the floor. Time and time again, they appeared again.

A rug was placed over the stains, the next day the blood had soaked through the cover. After a repeat performance the next October 25, the ghost had won and Sam and his family moved out as well.

And so it goes with each family that inhabits the Taylor house. In the later part of last century the occupants dealt with the spirit by spending October 25 away from home, allowing the ghost-free reign to search the house for whatever it was missing. No one knows what the ghost is looking for although some people think it’s looking for the left arm it lost long ago.

So if you drive by Mount Holly late on October 25, look for a blue light coming from a dark house. But don’t interrupt its search. You may end up helping it for eternity.