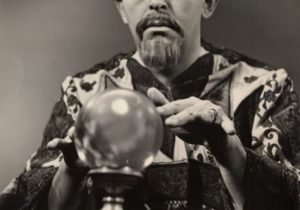 From the ancient Utanapishtim of the Epic of Gilgamesh to the seers and soothsayers of the Bible to John Edwards and the Long Island Medium, psychics, mediums, clairvoyants and witches have never been much further than an oracle or incantation away from their next paycheck.

As evidenced in Middle Age Europe, Britain and America, at certain times in history it has been the psychic who would be the one paying, and with their own lives at that. Here is just one of those tales…

Our story starts on June 20th, 1847, way up in the very northwest corner of the state, when a 10-year-old boy by the name of David Schamp went missing.

His father, Peter, was a wealthy member of the small community of Bryan, Ohio, and soon the whole town was on the search for the vanished child. After five days of combing the woods with no luck, townspeople began focusing their suspicion on a 17-year-old “half-witted” drifter from the Wooster area named Daniel Heckerthorn.

When located and confronted, Heckerthorn confessed to luring the young boy into the woods and giving him arsenic laced candy.

After it appeared that the poison was taking too long to produce its desired effect, Heckerthorn grabbed the child by the heels and swung him in circles to build momentum before directing him head first into the gnarled knot of a beech tree, successfully ending the life of David Schamp.

Heckerthorn then carried the body to a nearby stream, where he concealed the crime by burying his victim in a pile of rotting wood. With this confession one could lazily assume the case solved and final, were it not that Heckerthorn continued talking.

The despicable murderer went on to describe how he had long desired to learn the art of fortune telling and thought he would finally get his chance when he met Andrew F. Tyler, a travelling clairvoyant.

According to Heckerthorn, Tyler had visited the stately Schamp home and, afterward, concocted a plan in which his teenage understudy would murder the child, hide the body and then the two would leave town for several months, finally gaining fame a fortune upon their return when they would accurately “divine” the location of the body.

There are a few problems with this plan:

1) Neither of them left town after the murder, though Heckerthorn did try hiding.

2) In the full heat of summer it would be very likely that the body would be discovered well before their intended leave of absence was over.

Either way, both were found guilty and sentenced to hang.

Taking into account his youth and “imbecility”, the court later decided to commute Daniel Heckerthorn’s sentence from death to life in prison, whereas Andrew Tyler was taken to the gallows in downtown Bryan on January 26th, 1849, to suffer a horribly botched and undignified execution.

The trouble began when a mob, anxious to witness the death of an accused child murderer, tore down the privacy fence surrounding the gallows, thereby violating state law that forbade public executions.

Then there was Tyler’s own speech to the assembled crowd. He strongly asserted his innocence and followed his address with a prayer “for forgiveness of all who had sought his hurt, and that he and they might meet in a happier world.”

After his prayer, Tyler insisted that there only be one foot of slack in the hanging rope, it was placed around his neck and the trap door was sprung. Done? Nope.

In his short fall, the knot of the noose slipped around Tyler’s neck and caught under his chin, leaving him completely suspended but neither breaking his neck nor causing strangulation.

It was said that no one could help but turn away from the gruesome sight as Tyler struggled and groaned in agony. Mercifully, the sheriff had the door raised and Tyler was spared for a few moments more.

As the hanging rope was being lengthened the sheriff asked Tyler if he still maintained his innocence, to which he replied “I am innocent” and with that, the trap door was again sprung with his last words being “For God’s sake shorten the rope!”

And there is the tale of the execution of a clairvoyant Ohio-style.