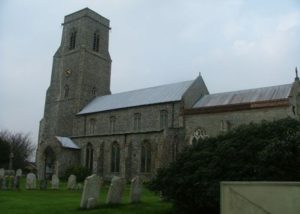 St Botolph’s Church, Aldgate is a Church of England parish church in the City of London standing at the junction of Houndsditch and Aldgate High Street.

The current 18th Century church is made of brick with stone quoins and window casings. The tower is square with an obelisk shaped spire.

The first written record of this church appears in 1115 when it was received by the Holy Trinity Aldgate priory but the parochial foundations may very well be pre-1066. The church was rebuilt in the 16th Century and then again between 1741-1744.

St Botolph’s church was severely bombed during the Second World War and then, after its restoration by Rodney Tatchell, was much damaged by an inexplicable outbreak of fire in 1965. It is also the site of the murder of Catherine Eddowes by Jack the Ripper.

In 1982, photographer Chris Brackley took one of the most famous ghost photos ever inside the historic St Botolph’s church. When the photograph was developed he was astonished to see a figure standing in old-fashioned clothes.

High in the church’s loft, seen in the upper right-hand corner of his photograph, is the transparent form of what looks like a woman. According to Brackley, to his knowledge there were only three people in the church at the time the photo was taken, and none of them were in that loft. 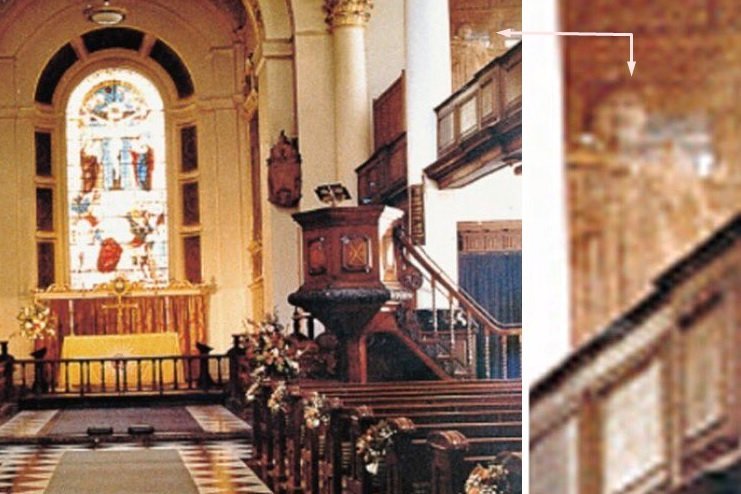 The negative was subjected to considerable expert analysis, which revealed that there was no double exposure to the film and it was also proved that none of Chris’s equipment was faulty.

The only explanation for the mysterious figure was that someone must have actually been standing on the balcony when the picture was taken.

A few years later Chris was contacted by a builder who had been employed on restoration work in St Botolph’s crypt.

He explained that, in knocking down a wall he had inadvertently disturbed a pile of old coffins. One had come open to reveal a reasonably well-preserved body the face of which bore an uncanny resemblance to the figure that had made an uninvited appearance in Chris’s photograph.

Over the years, rumours of paranormal activity and reported sightings of ghosts in the church have attracted ghost hunters and Satanists to the premises.

Periodically, evidence has been found of occult ceremonies; remains of animal sacrifices have been left in the church, candles and fires have been lit, and pentagrams and other symbols painted on the stonework. The Churches Conservation Trust have expressed dismay at the damage to the church fabric and acts of “desecration”.

Carl Pruitt – The Legend Of The Vengeful Ghost