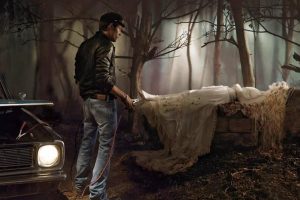 During blasting at a coal mine, in the core of a twenty-meter coal seam at a depth of more than 70 meters, a miner Karnaukhov (later died on a motorcycle under the wheels of KrAZ) discovered a two-meter marble casket of amazingly precise mechanical workmanship.

At the command of the head of the site, Alexander Alexandrovich Masalygin (died in 1980. The official version is a stomach ulcer), all work was immediately stopped.

They lifted the casket to the surface and began to open it, pounding the putty, which had petrified from time to time, along the edges. Not so much from the blows as from the heat of the sun, the putty had turned into a clear liquid and flowed.

One miner even tried it on his tongue (a week later he went crazy, and in February he froze at the door of his own house). The lid of the box was a perfect fit. For a stronger connection, the inner edge was bordered by a double edge, tightly entering the 15-cm wall thickness.

The box turned out to be a coffin filled to the brim with a pink-blue crystal-clear liquid, under the springy surface of which rested a tall (about 180 cm), slender, unusually beautiful woman – she looked to be about thirty, with delicate European features and large, wide-open blue eyes. Thick dark blond curls with a reddish tint to the waist slightly covered delicate white hands resting along the body with short, neatly trimmed nails.

She was dressed in a snow-white lace transparent dress, a length just below the knees. With short sleeves embroidered with colorful flowers. There was no underwear. It seemed that the woman was not dead, but asleep. At the head is a black, rectangular, rounded at one end, metal box (something like a cell phone), about 25 by 10 cm in size.

The coffin stood open for public viewing from about 10:00 to 15:00. The whole village came to see the miracle. Almost immediately, the discovery was reported to the district center. The authorities, firefighters, the military, and the police came in large numbers.

By 2:00 pm, a brick-colored helicopter flew from the area and delivered a dozen respectable “comrades” in civilian clothes, who immediately declared that the place was contagious and ordered those present to move away from the coffin.

After that, they cordoned off the place of the find and enumerated everyone who touched the coffin and even those who were close, supposedly for an urgent medical examination.

The authorities wanted to drag the coffin to the helicopter, but the burden was too heavy, and they decided to make the task easier by removing the liquid. After pumping out the liquid from the coffin, the corpse began to turn black right before our eyes. Then the liquid was poured again, and the blackness began to quickly disappear.

A minute later, a blush played again on the cheeks of the deceased, and the entire body of the deceased acquired its former life-like appearance. The coffin was closed and carried into a helicopter, the remains of the putty were collected together with the earth in plastic bags and the witnesses were ordered to disperse. After that, the helicopter soared up and headed for Novosibirsk.

Five days later, an elderly professor arrived in Rzhavchik from Novosibirsk and gave a lecture in a village club on the preliminary results of laboratory studies of a recent find. The professor said that this Rzhavchik find would change the very understanding of history. In the very near future, Soviet scientists will publish the results of their research, and this will shock the scientific world.

The woman was buried in the Carboniferous period of the Paleozoic era, millions of years before the advent of dinosaurs, long before the formation of coal on the planet, when, according to modern ideas, the earth was still a continuous plant kingdom.

At first, an alien version was put forward, but the genetic analysis of the woman’s body showed her 100% similarity with the modern man.

It has been established that the level of civilization to which the woman belonged exceeds all known so far, including ours, since the nature of the fabric from which the “princess’s” dress is made does not lend itself to scientific analysis. The technique for the production of such material by mankind has not yet been invented.

The composition of the pink-blue liquid has not yet been determined, only some of its constituent components. The professor said nothing about the metal box, except that it was being studied.

The lecturer left, and a couple of days later a tiny note appeared in the Tisul regional newspaper that an archaeological relic had been discovered near the village of Rzhavchik, which would shed light on history.

The locals protested – there were so many sensations, and there were three lines in the newspaper.

The indignation subsided by itself when the Tisulsky district was suddenly cordoned off by the military, and the place where the coffin was found was carefully dug up and covered with earth.

And yet, despite the efforts of the authorities, among the inhabitants of the village there were fighters for the truth. One of the heroes ran around all instances, even wrote a letter to the Central Committee of the CPSU, but a year later he died suddenly (according to the official version, from heart failure).

When all six “pioneers” of the coffin died one after another in car accidents within a year, the surviving witnesses fell silent forever.

In 1973, when, according to the authorities, “everything calmed down”, on the shores and islands of Lake Berchikul, which is six kilometers from the place where the sarcophagus was found, large-scale excavations were carried out all summer until late autumn in the strictest secrecy. The place of work was cordoned off by soldiers and police.

Soldiers and police refused to give details, but the whole village saw how a “brick” helicopter kept flying to the excavation site and taking something away, and upon completion of work on the islands and shores of Berchikul, hundreds of graves dug up and carefully covered with earth remained.