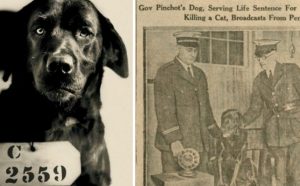 The story goes that Pep, a Black Labrador dog, was sentenced to life imprisonment at the Eastern State Penitentiary, without the chance of parole in 1924 for the gruesome killing of the Pennsylvania governor Gifford Pinchots wifes cat.

The story made the newspapers at the time, and many will have seen his prison mugshot from 1924, where he is seen with an identification number hanging form around his neck looking decisively guilty.

Prison records also reflect that Pep was assigned an inmate number (no. C2559), which is seen in his mug shot… except the story of his incarceration and crime isn’t actually true, but why should the truth be allowed to get in the way of a good story and newspaper headline.

Pep was actually entirely innocent of the crime of cat murder, and his actual offence was nothing more serious than chewing the cushions of the sofa on the governor’s front porch. The story of Pep killing the cat was entirely fictitious, made up by newspaper reporters.

Pep had been given to the Governor and his wife as a gift by their nephew, but he had a tendency to chew on the cushions of the front porch sofa, and after a visit to the Eastern State Penitentiary, the Governor had seen how dogs had been used to help inmates rehabilitation, and decided his unruly dog could be used in the same way at the prison, sending him there as a mascot for the prisoners.

Pep soon became a favourite pet to the inmates, at the Eastern State Penitentiary, and in 1929 when the new Graterford prison was built, he would travel back and forth with the prison work crew.

Pep spent about 10-years working in the prison system, helping to rehabilitate prisoners before he died of natural causes. He was buried in the prison grounds.

Governor Pinchot’s son would later recall how his father was inundated with ‘absolutely thousands of letters’ about Pep and his prison sentence.