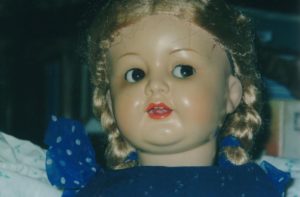 Note from the current owner: The doll is strange even for a collector of paranormal items. She can startle you by appearing in unexpected places within seconds of you having been looking in that direction and loves attention and playing hide and seek.

I have heard her scampering around and giggling. Several times even caught her on photo. Her arms and legs are soft yet firm. However I have tried to bend them when she’s let me hold her and there isn’t much give. I don’t understand.

Her activity has been more noticeable lately since I had my nieces over to visit so I want to sell her as fast as possible.

Yana was a girl at the age of eight when her mother came to America on a boat in the 70’s from Mother Russia after her father died of tuberculosis. Her mother had a brother living in America who offered to take them in. Unfortunately, Matvej was a brutish man, with a taste for young flesh her mother was unaware of.

Yana loved her new school…her new clothes…her new doll that her mother bought her at a thrift store…Most of all she loved the attention Matvej paid her and the way her uncle would play with her and tickle her. And so did her mother. Each evening as Alina washed dishes, Matvej would play with young Yana and she would hear her daughter giggling in her room.

Until a day came when Yana’s uncle began to say “oops”. At first Yana thought it really was an accident that his finger found its way there. But as it happened more often and it simply didn’t slip in and out….when it stayed there….she thought to tell her mother.

She told her uncle she had to go potty and he let her up. When she left the room she shyly walked to her mother. “Momma”, she said, “Matvej is touching inside of me”. He mother stopped washing dishes and looked at her daughter in rage. “How dare you say such a thing!”, she said,” Matvejis would never do this!” And reached out and slapped her daughter viciously across the face with her wet hand.

A single tear ran down Yana’s cheek as she stared in unbelief and shame at her mother. At that moment she knew she was alone. That night as she lay in bed she whispered to her doll of her pain and sense of betrayal and wept.

She cried for a long time and as she finally found sleep she heard her bedroom door open. The silhouette of her uncle was all she could see with her eyes blurred by tears and her heart caught in her throat.

By the time she had reached puberty she had become antisocial. She barely spoke and had no friends at school. She loathed all male contact and attention. Anyone who tried to show her kindness was met with coldness and aggression.

Yama was molested, raped and sodomized for 5 years before she became pregnant at the age of thirteen. She could not imagine a life outside of her own and she did not want this life for her unborn child. Each night she conveyed her agony and rage to her doll Natasha after her uncle left her leaking on the damp bedspred. She spoke of her plans to end her life and to destroy the seed inside her from the devil man who planted it there.

One night as she whispered and wept she felt Natasha’s hand sweep the hair behind her ear. Shocked Yana withdrew. Natasha her doll who had comforted her for so many years in silence had found a voice and it spoke of an age-old solution. A life for a life.

Natasha would inflict the same pain and humiliation on her uncle that he had her for so many years. In order to do so Yana would have to give her life and that of her unborn child to lend strength to the spirit which had inhabited the doll after observing how much Yana loved it. It fed off of Yana’s anguish and misery…but now it realized it could have more than just this. It could have a life again. Thus was the bargain struck.

There is no record of what became of Matvej. Yana commuted suicide shortly before he disappeared… drinking all of the household cleaners under the sink and in the garage. Alina became a severe alcoholic and passed away. The doll was found in a trunk of her daughter’s things along with notes and clothes and drawings.