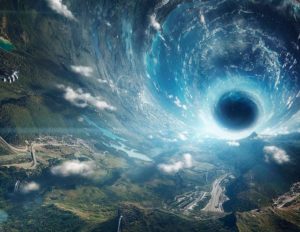 The following account of a possible visit to another dimension in time or space was forwarded to this author by Dr. Raul Rios Centeno, an investigator of the unexplained in Lima, Peru.

“Several months ago,” begins his fascinating narration, “a patient came to see me about a serious case of hemiplegia. The patient claimed to be 30 years old but was unable to prove it, stating that she’d lost her formal identification card. It was a very strange case of hemiplegia, since upon examination with a CAT (Computerized Axial Tomography) scan, there were neither areas showing bleeding vessels nor any traumatic lesions.”

When I began asking questions about the case, the patient told me the following: “I was at a campground in the vicinity of the ancient stone forest, Markawasi, when I went out exploring late at night with some friends. Oddly enough, we heard the strains of music and noticed a small torch-lit stone cabin.

I was able to see people dancing inside, but upon getting closer I felt a sudden sensation of cold which I paid little attention to, and I stuck my head through an open door. It was then that I saw the occupants were clad in 17th century fashion. I tried to enter the room, but one of my girlfriends pulled me out.”

“The patient was tugged out by one of her friends, and her body became paralyzed in half precisely as she was drawn out of the “stone cabin”. My conclusion is that the probable cause behind the hemiplegia is unknown.

No medical test was able to ascertain its cause. Nonetheless, an EEG was able to show that the left hemisphere of the brain did not show signs of normal functioning, as well as an abnormal amount of electric waves.

“Many Peruvians claim having had contact experiences in Markawasi, while many scholars indicate the existence of a dimensional doorway. No conclusive proof of this exists, of course. Some friends, myself, obviously, and others who have visited the stone forest can attest to the existence of a strange kind of energy.

“According to those persons having knowledge of this subject, dimensional doorways tend to open and close not necessarily in specific places. The patient is currently undergoing physical rehabilitation in Lima’s Arzobispo Loayza National Hospital.

“The unanswered question is, of course, what would have happened if her body had entered completely into the stone cabin? Would she have gone into another dimension? I suppose the truth shall be known in the fullness of time.”

Dr. Rios fascinating account was followed up with the following information concerning the CAT scan results on the anonymous patient. The test, he indicated, showed “Intact intracranial regions without any specific area having been compromised.

There are neither swelling nor color changes which may suggest some manner of trauma. The clinician certifying this exam cannot find a justified cause for the hemiplegia in the left hemisphere, due to the fact its vascularization and irrigation fall within parameters considered to be normal. The EEG shows areas evidently paralyzed due to the lack of electric current transmission.

These tests lead me to believe — and this is my personal opinion, since my colleagues have simply cataloged it as an “unknown affliction” — that the dimensional shift, or “partial entry” of this person into this anomalous zone, have able to produce a change in the energy flow existing in her nervous system, or perhaps even a change in the type of energy.

Given that the cranial area is where our nerve impulses are contained — in other words, the right cerebral hemisphere controls the left side of the body and viceversa — this could be the reason why the left hand autonomous nervous system did not at all affect the operation of crucial organs such as the heart or the stomach, which are governed by the right cerebral hemisphere.”

A well-known author once described talk of other dimensions as “science fiction jiggery-pokery”. In the UFO field, particularly among believers of the nuts-and-bolts aliens from space contingent, belief in other dimensions is considered a sign of mental bankruptcy.

Yet these other dimensions, levels or worlds beyond our own represent beliefs far older than those expressed by 20th century authors and theoreticians. Religions throughout the course of human history have expressed a belief in parallel worlds adjacent to our own, usually accessible only to tribal shamans, sorcerers or people gifted with special insight.

Certain parts of the world were famous as locations in which the barrier between the dimensions or worlds was particularly slender, and were known as places where wonderful and often frightening sights could be seen, or else as locations where human intruders could vanish without a trace.

Almost all traditions express a belief that there is life in these alternate universes: these are the abodes of fairies, elves, and even angels in some cases, and of monsters, ghosts and much worse in other traditions.

Northern European traditions expressed the belief that elves and fairies took advantage of the right angles of human dwellings to build doorways to their own realities (and in turn, Frank Belknap Long took advantage of this idea to write “The Hounds of Tindalos”, a Lovecraftian tale of extra dimensional monsters who can materialize only through rooms having walls at right angles — circular chambers offering the only kind of protection against them).

Jacques Bergier believed that such gateways to other dimensions were an artificial and supernatural phenomenon created by powerful forces on “the other side” to carry out their unguessable transactions in our own level of existence.

The late Carlos Castañeda wrote that the sorcerer Don Juan Matus believed in the existence of an area best described as a “crevasse between realities” in which the material world imperceptibly gives way to the spirit world and other dimensions.

However, only someone well versed in the hidden lore may recognize these gateways for what they are and make use of them. In his book Guía a la España Mágica (A Guide to Magical Spain) Spanish author Juan G. Atienza has pointed out that the Grail Epics are in fact a quest for this particular place where the mortal world meets the undying lands or heaven.

In both Western and Eastern cultures alike we are told to believe in a spirit world or parallel universe in which our deities, their minions and their adversaries, appear to dwell.

This belief is so deeply rooted that to even question it is an exercise in futility. However, even when mathematicians and quantum physicists insist that such levels of existence are not only possible but probable, 20th century humanity refuses to believe that it could well be at the mercy of forces beyond its comprehension.

Author: Scott Corrales, a writer and translator of paranormal subjects in Latin America and Spain. His work has appeared in magazines in the U.S., U.K., Japan, Spain and Italy.